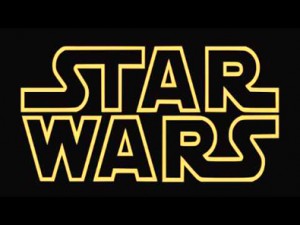 I have married into a Star Wars family.

My beloved new husband, Anthony (yes, I’ll post some wedding pictures soon!), grew up on the Star Wars movies and delved into the novels as a teenager. His mom loved Ewoks, and his younger brother’s alternate moniker is Vader (though he’s an extremely good-natured guy). Our new apartment boasts, among other things, an R2D2 pepper grinder, a ceramic Death Star filled with peanuts for guests to munch on, and a Dagobah shower curtain

So, I’ve had to become a bit of a Star Wars fan in self-defense. I saw the original trilogy of movies in college, but when Episode VII came out this past December, I actually saw it three times.

And I really liked it.

I know that some true Star Wars fans found plot and continuity elements to quibble with in the movie, and perhaps it’s partly because I’m not as well versed in the Star Wars canon that I appreciated the new movie more. It’s hard to think when a movie has so scattered America with merchandise as did Star Wars: The Force Awakens (except for Frozen—they’ve both got Disney behind them, maybe that has something to do with it).

But even Disney can’t make a flop a success. So what made this movie work?

Not foul language or sexuality or even gratuitous violence. Yes, there’s action and adventure and peril, but I think more important were the complex, well-developed characters, the strong storyline, and, of course, a well-loved history behind it. But if it hadn’t been a good story, I don’t think the history would have been enough to obliterate so many box office records. (Plus I really liked seeing black and female characters in such complex, non-stereotyped protagonist roles.) 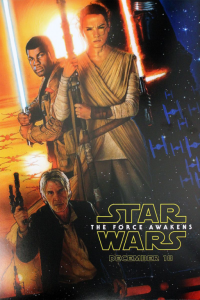 There is something inescapable that seizes our hearts about fighting evil with goodness and darkness with light. About characters willing to sacrifice and struggle for what is right, admit when they are wrong, and put others before themselves. About motley, underdog good guys facing seemingly insurmountable odds of evil—and yet, somehow, incredibly, managing to win.

One line especially stood out to me from the movie. Former skeptic Han Solo is talking about the spiritual side of the Star Wars universe, and speaking of the Force, the Jedi, the Light Side and the Dark, he says something like, “And you know what the crazy thing is? It’s all true.”

I think often we tend to be like the skeptics in the Star Wars universe. We go blindly through life, thinking what we see on the surface, what we can physically touch, is all there is—and missing the real story, the battle and reality that is underneath and shaping all of our lives, whether we realize it or not.

Anthony and I saw a couple of other movies over our honeymoon—Batman vs. Superman and Zootopia (I recommend the second more). I don’t usually do this, but during each movie, there was a moment when I pulled from the story on-screen and looked at the faces of the people surrounding me. And I was struck by both the wonder and the longing, however subtle, that I saw there.

In Batman vs. Superman, I chanced to look round when one character spoke of how people just wanted to believe in something good. And I saw that in the faces of those around me. It made me realize something of why so many hundreds, thousands, even millions of people constantly flock to sit in dark theaters and eat bad popcorn and watch a story play out on a big screen in front of them. Yes, it’s amusing, and something to do, and yes, sometimes the stories are pretty crummy. But there’s something deeper too.

And it’s not the crummy stories that stay in people’s hearts for years and years and attract the deepest followings. It’s the stories of heroes, of goodness and truth triumphing over evil, often at the cost of great sacrifice. It’s Star Wars and The Lord of the Rings, the Hunger Games and Les Misérables, and even superhero movies, though this particular one wasn’t so great.

I think it’s because these stories speak to the eternity God has set in our hearts, whether we consciously know it or not. 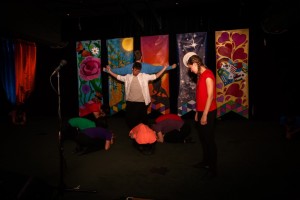 Just before my wedding, I attended a rehearsal of the Broadway musical revue our school was preparing, since I wouldn’t be able to see my students perform the real thing during my honeymoon. After fun songs from The Lion King and Oklahoma!, they moved into a series of five numbers from Godspell. And at the end, they portrayed part of the “Finale” from the show, beginning with Jesus hanging on the cross, having just died, surrounded by his weeping disciples.

My throat tightened as I watched them—a young man I’ve known since he was a boy growing up in our theater company, now hanging limp from the “cross” formed by the arms of another of my high school boys. I watched as some of the kids lifted him to their shoulders and carried him out, while the younger ones gathered in a huddled clump, the genuine tears of one eighth-grade girl drawing some of my own.

The stage was dark.

And then—other disciples came rushing in, their faces bright with hope, singing “Prepare Ye.” And then with a burst of light, Jesus came bounding on stage, face beaming, arms thrown wide to welcome his friends who rushed at him, shrieking with grief turned to hardly-believing joy. 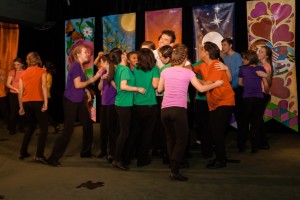 After that’s when I really had to swipe at my eyes. Partly because I love these kids and they did a great job, but more because it’s true. That story represented in Godspell really happened. And that truth would change our lives today, if we really lived it. Don’t you think?

I think that’s one reason why we need stories like Star Wars. And even more, we need to remember why we need them. Because I don’t believe the story of Jesus dying and rising again, having conquered evil against insurmountable odds, was invented from our longing for stories to play out in a certain way. I think instead, we long for stories that reflect that greater story because it is real. We resonate with veracity God has already embedded into our DNA, whether we realize it or not. With a sense of good and evil, of darkness vs. light, of truth and goodness and beauty being worth fighting for and even dying for, and of sacrifice leading to resurrection.

And that those who are crazy enough to believe and set out against enormous odds are the ones who actually triumph in the end.

Because the crazy thing is…it’s all true.

Are you a Star Wars fan? If not, what stories resonate deepest for you, and why do you think they do? What hope is hidden there? Please comment and share!

2 comments on “And the Crazy Thing Is, It’s All True: Star Wars, Godspell, and Stories That Give Us Hope”