by Lauraine Snelling, with Kiersti Giron 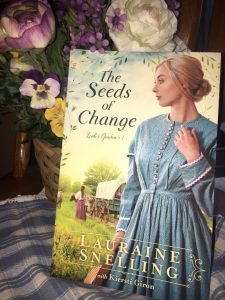 Larkspur Nielsen is ready for change, frustrated by the small mindedness of her Ohio hometown and its lack of opportunity for her or her younger sisters. But the push to leave comes faster than she ever expected when several of her bold actions for justice earn her vindictive enemies. Overnight, they must pack up and ready to make a new life out West, hoping to escape notice and any opportunities for revenge.

Knowing that four women traveling together will draw unexpected attention, Larkspur dons a disguise, passing herself off as “Clark” Nielsen accompanying his three sisters. But maintaining the ruse is more difficult than Larkspur imagined, as if protecting her headstrong, starry-eyed sisters from difficult circumstances and available young men. Will reaching a safe place to call home ever be possible?

Buy Seeds of Change at any of these links!

Kiersti’s Novels (not published yet)

Beneath a Turquoise Sky

Struggling to find her place in the world after her widowed father remarries, Caroline Haynes pursues a long-buried dream westward to teach at a Navajo mission boarding school in 1911. However, walls of hurt and cultural misunderstanding threaten to keep her from reaching the children she longs to touch.  Handsome young Rev. Willis Abernathy seems sure he knows what is best for the Navajo people—and for Caroline—but her interest is piqued by Tse, the young man in charge of the mission’s livestock, who has resumed the ways of his people yet insists he still follows Christ.

Tse Tsosie went back to his Navajo family after graduating from the mission school, leading the missionaries to assume he also returned to his traditional beliefs. Now family need has brought him back to the mission. Longing to introduce Jesus to his people in a way they can understand, Tse battles past wounds and the disapproval of his boyhood friend Willis. Meanwhile, Caroline’s arrival brings surprises and more turmoil to the school…and to Tse’s heart.

When crisis forces Tse and Caroline to make a choice, will they find a path together…or will the chasm between their peoples be too great to span?

Veronica lost her father. The World War II vet lost his daughter. Can God craft the broken pieces of their hearts into a whole?

Journalist Veronica Lee isn’t happy about being pregnant, no matter what her husband, Nathan, thinks. Now the news that something is wrong with her unborn baby threatens to tear her carefully held-together life apart. She’s already got plenty to handle adjusting to a move from Los Angeles to rural New Mexico so Nathan can take over his family’s business. If growing up the daughter of a Vietnam vet with PTSD has left Veronica doubting her ability to mother even a healthy child, how will she handle a baby with special needs? 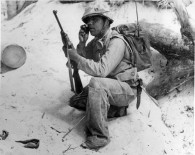 Then there’s Fred Charley, the Navajo Code Talker she’s been assigned to profile for the local paper—much to her dismay. Fred’s raw memories of boarding school and war in the Pacific resurrect pieces of Veronica’s past she’d rather forget. Yet she’s drawn to the elderly man, with a growing passion to not only tell his story but also mend the fragments of her own heart.

With her marriage and her faith stretched to the breaking point, will Veronica find healing and strength in time to face the biggest challenge of her life?

Fire in My Heart

He is driven by duty and burdened by the past. She just wants to make things right again. Can they find atonement together?

It’s 1863, and passionate young abolitionist Lucinda Mae Allen has found her niche fighting for equality amid Washington D.C. society. But when tragedy leaves her alone with compromised health, she must leave the friends she loves and travel west to her estranged father at the remote outpost of Fort Tejon, California. When she discovers injustice rages on the frontier as well—and that her father may be hiding a terrible secret—Lucinda must face whether the zeal in her heart can withstand the burden of sins from the past.

ng scars from the Indian Wars and the loss of his young wife, just wants to keep the peace at Fort Tejon and do his duty to not be demoted…again. But when he discovers several hundred Paiute Indians held unjustly at the fort, memories are roused that he has long tried to bury. He and Lucinda join forces for the rights of the Paiute, but the struggle births feelings between them that Isaiah isn’t ready for—and may never be.

When romance, murder, and wounds of the past clash in the urgency of the present, can Lucinda and Isaiah muster the courage to find forgiveness, healing, and even…love?

Kiersti is represented by Wendy Lawton of Books & Such Literary Agency.