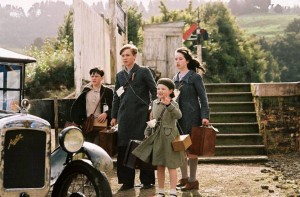 The Pevensies in The Lion, the Witch and the Wardrobe movie by Walden Media

Some of my favorite movies are set in wartime.

At the beginning of The Lion, the Witch, and the Wardrobe, German bombers drone ominously over London, sending the Pevensie children and their mother scurrying for their lives into a bomb shelter. The war forces Peter, Susan, Edmund, and Lucy away from home…and eventually into yet another battle, this time in another world.

In Little Women, while we don’t see any battles, The Civil War hangs a veil of urgency over the gentle story of home and family. Happy though the March home is, their father is far away in danger as a chaplain for the Union army. And that poignant undercurrent adds deeper conflict to the March girls’ daily troubles and triumphs.

And in Winter’s End, the last of the Sarah, Plain and Tall trilogy, the deep internal conflicts the Whitting family faces are heightened by the global conflict of World War I, far away yet near their hearts as their daughter’s fiancé fights in Europe. 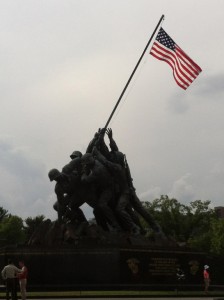 The Marines Memorial in Washington DC

Numerous other stories are set in the midst of battle. The historical genre of fiction I write in is even often period-labeled by wars: this novel is Revolutionary War-era, that one Civil War or World War II.

We like to read or watch stories set in wartime a lot more than we like to live them, I guess. And yet, I’ve been realizing again lately, all of us live in the midst of a war.

It’s so easy for me to forget, to start going on my way and thinking I’m minding my own business and taking care of my own life. And then—BOOM—battle erupts around me. And I sit there in the shambles and wonder: “What happened?”

I forgot I was living in a war zone. And maybe I went out without my protective gear. 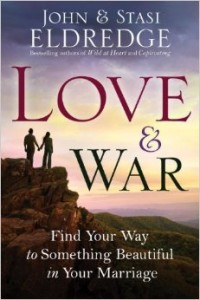 Love and War by John and Stasi Eldredge

I’ve been reading a book on marriage called Love and War, by John and Stasi Eldredge. It’s really, really good. And one of their points that has struck me hard is that we are living in the midst of a war…a spiritual battle. All the time. Its attacks might be harder to see than those World War II bombers over London, but they are just as real, just as deadly.

Paul wrote that Satan prowls around us like a roaring lion, seeking to devour. That’s strong language! But so often, we forget he’s that big of a deal. And then when disaster strikes, or a relationship blows up, or we hurt and are hurt by our loved ones over something that should be bringing blessing, we wonder what happened.

But I don’t think realizing we live in a war zone needs to be bad news. In a way, I find it comforting, steadying, freeing even. If we were living in the midst of the London blitz, but we had no idea why things kept blowing up around us, wouldn’t we just about go crazy—or start blaming each other? If someone suddenly told us we had an outside enemy who was attacking, in a way it might be a relief just to understand what was going on. And then be able to take some steps to arm ourselves against it.

Obviously spiritual warfare doesn’t explain all the problems in our lives, or all that’s broken in the world. Our own sinfulness accounts for a lot of that. But I think the two can be rather intertwined as well…they certainly were in the Garden of Eden. This God-created world has come under the power of the evil one, as the Bible says. But it also says that, as C.S. Lewis put it, there has been an “invasion”—Jesus, coming into this world to take it back. And we get to be part of that.

What about you? Do you think of yourself as living in a war zone? How can we better live as part of Christ’s lovingly subversive “army” in this world? Please comment and share!

2 comments on “Living in a War Zone: Spiritual Battle and What’s Really Going On”