I hope you’ve been continuing to enjoy Anthony’s and my love story! If you’d like to read the first two installments, click here and here.

Anthony and I were on our second official “outing,” to the local arboretum where he invited me to visit. While I still felt a bit shy and awkward—especially when we happened upon a wedding gazebo in one of the gardens 🙂 —we grew a little more comfortable with each other as we walked about looking at the various areas of flora and foliage. 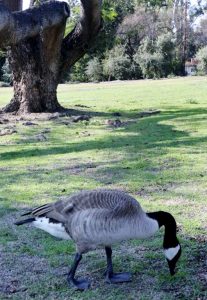 A goose at the Arboretum

Anthony even made me laugh a couple of times, as when he quipped that the flocks of grazing geese must have a “time-share” here. His quiet wit caught me off guard.

We talked more too, Anthony telling me about the entertainment he and a friend from high school were organizing for a women’s lunch at the church of their tenth grade English teacher, a wonderful lady who has stayed connected with many of her students over the years. Anthony and his friend Ben (later his best man) had several times put together a themed diversion for the ladies. This year the theme was “America the Beautiful,” so they were thinking of the Virginia Reel, though they were still trying to get a cohesive group of dancers together.

My ears perked up, as I knew that dance well, but I didn’t say anything. 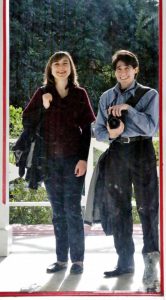 First picture on an outing together–snapped by Anthony in the outside mirror of a cottage at the gardens.

Afterward, Anthony asked if I’d like to go to dinner, but I wasn’t feeling very well that day. His kindness and understanding when I said I needed to go home and rest touched me, and I added compassion to the growing list of qualities I was noticing.

A few days later, he sent me a very polite message, filled with caveats if I didn’t feel comfortable doing this, saying they were indeed short one female dancer for the ladies luncheon. He knew I liked dancing, so would I by any chance be interested in joining in?

With a bubble of excitement inside, I said I would.

So for the first time, I arrived at a gathering of Anthony’s friends. I met “the Queen,” a wonderful lady who had so captured the imaginations of her 10th grade English class with medieval literature and history years ago that they formed their own “court,” complete with rankings, ceremonies, and granted lands, and still hold close bonds today. She welcomed me graciously, chuckled at my curtsey, and told me she thought the world of Anthony—a theme I was beginning to hear from anyone who had known this man very long, and that made me think.

When we lined up for our first practice of the Virginia Reel, I first ended up across from Anthony’s good friend Ben (later his best man). With a subtle word and a quick maneuver, though, I saw that Anthony and Ben had switched places, and I was to be Anthony’s partner. The music started, and suddenly we were taking hands as head couple and sashaying down the line.

I saw a different side of Anthony that day, as he led the group, directed the dancing, and kept order among some rather lively high schoolers. He looked handsome with his neat dark hair, blue button-down shirt and dark pants (yes, I remember what he was wearing), and I was impressed when he raised his voice to give final directions to a couple of teenage guys who weren’t particularly paying attention.

“Gentlemen! Before you depart!” he announced firmly.

And I noticed that, despite the polite refinement of his words—or perhaps because of it—they settled down and listened.

After the actual performance at the ladies’ luncheon, we hung around with the other dancers and the Queen, a certain bond sprung as always between members of a “cast,” even one as informal and short-lived as this. The Queen discussed ideas with Anthony for next year’s luncheon, where the theme was to be “Starlight and Moonbeams.”

“A waltz?” Anthony suggested. After all, he and a number of his classmates had learned to waltz as high school seniors for a special graduation surprise for the Queen.

She loved the idea. So there, in the carpeted side room of the church, Anthony started stepping out the rhythm of the box waltz, reminding himself of the flow. And I began mirroring him, my steps uncertain, as I’d never been comfortable with the box waltz. I’d learned a more Viennese version as a little girl and found that rhythm more natural.

But we stepped to and fro, facing each other but not too close, our feet moving in time. And then I looked up at him and followed a brave impulse.

“Will you show me?” I held out my hands.

He held out his hand for mine, placing his other at my waist while I rested mine on his shoulder. And I followed the rhythm of his feet: back, side, close—front, side, close—slowly starting to grasp the sway of the steps, trying not to think too hard about the fact that I was dancing in Anthony’s arms.

All dressed up “Western” for the dancing performance.

At last he stopped and released me, and the Queen responded with delight to our performance.

I’m pretty sure my heart was pounding from more than just the dance…but it was only later I learned Anthony had stopped because he suddenly couldn’t remember the steps anymore.

And so we continued, these quiet, steady steps of getting to know each other.

Anthony learned that I loved Broadway soundtracks—and I confess one of the first things that piqued my interest was getting a peek into his CD collection in the car and seeing so many favorites there: Newsies, Les Misérables, My Fair Lady, Phantom of the Opera, Guys and Dolls. And some delightful ones fairly new to me, like The Scarlet Pimpernel. When he came to pick me up for one of our increasingly-frequent outings, I found he would often have a musical CD already set to play in the car—just one of the many demonstrations of thoughtfulness I was starting to see in this man.

Sometime in those early months, we were listening to The King and I, and the song “Getting to Know You” came on. And I started softly singing along to the lyrics, thinking how well they described our relationship so far. 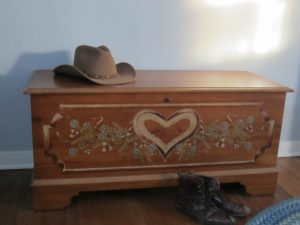 My hope chest at home with my hat and boots for the dance–somehow this picture captures my heart at that time. 🙂

We were more than friends, less than sweethearts. But we were getting to know each other, day by day…and more and more, I found I really liked what I saw.

Getting to Know You song, love story

4 comments on “Our Story: Of “Getting to Know You,” Virginia Reels, and a Certain Waltz”