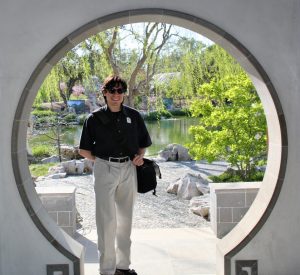 My handsome husband on one of our first outings, to botanical gardens before we were officially dating.

I didn’t fall in love at first sight with my husband.

In fact, when I first saw Anthony, I thought he was interested in someone else. Which he was, at the time.

And when we first went out, I was actually interested in someone else.

But I’m getting ahead of the story.

I remember the first time my cousin, Kim, told me about Anthony, a longtime friend of her then-boyfriend, now husband, Cody. 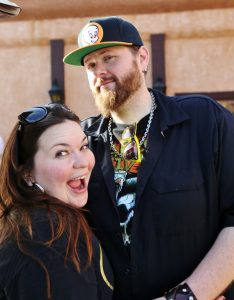 Kim and Cody, our matchmakers–don’t they look cute and scheming here? 🙂

She said she’d wondered about Anthony for me, and I remember getting a bit flustered—no one had ever even come close to trying to set me up before. But she showed me a picture of him on her phone, holding the little girl who would one day (little did I know) be our flower girl, the daughter of the couple who ran the church college group both Anthony and Cody had been part of. I admit my heart melted a bit to see a guy with a sweet smile and a toddler in his arms, but I really didn’t think anything would come of all this.

Later I looked Anthony up on Facebook, and saw his profile pic, a rather stern looking young man in a long ponytail and karate gi, holding a Japanese sword with a look of keen focus on his face.

Not my type, I thought. I pretty much put it all out of my mind.

Every so often, though, Kim would bring Anthony up again. She never pushed or pressured, just said, “Let me know if you ever want to meet him . . . we can have a dinner party or something.”

Then one day, Kim texted that they were going to see a play by a local Christian theater company where we had mutual friends, and would my sister and I like to come along. Oh, and their friend Anthony would be there too.

Whatever, why not, I thought. Might as well settle this once and for all.

But that evening, just before we left, I got a headache. A really bad, I’m-not-safe-to-drive kind of headache. (Even if Anthony still teases me that I was just trying to get out of meeting him.)

So I figured it must be a sign from God. I wasn’t supposed to meet this guy—it just wasn’t meant to be.

I didn’t actually meet Anthony until Kim and Cody’s engagement party, some months later. I thought he was interested in another girl at the time, so I greeted him, exchanged minimal pleasantries, and headed to another table with my sister. Anthony ended up visiting with both my parents that night, but not with me.

And I kept thinking, Definitely not going to happen. At least it was obvious now, right?

Anthony and me as best man and maid of honor. Kim and Cody had to get married to get us together!

Kim invited me to be her maid of honor, and my sister her bridesmaid. I was so touched, and it was a joy to walk through the wedding preparations with her. It wasn’t until her bachelorette party, as we sat around a restaurant table eating Indian food together, that one of Kim’s other friends asked who Cody’s best man was.

Oh, I thought. Well…it’ll be kind of hard to avoid talking to him now.

We conversed a little at the rehearsal, but it was at the rehearsal dinner that Anthony first really caught my eye. The same friend who had asked about the best man was there with her husband and adorable one-year-old little boy, who spent much of the evening cruising around the private dining room from one table and chair to another. At one point, the little guy unceremoniously climbed up on Anthony’s lap. Even though he was still eating, Anthony just circled his arm around the little fellow and held him while he continued his meal.

Aw. How many single young men would respond like that?

Later I found out Anthony was watching me interact with the toddler that evening too.

We ended up decorating the newlyweds’ house together while they were on their honeymoon, since we couldn’t decorate their rental going-away car. Kim’s mother-in-law claims that she saw the first sparks between Anthony and me while we blew up balloons and hung streamers. I wasn’t aware of it at the time, but we did have fun. And I found out Anthony liked the stage version of The Lion King—so we both enjoyed musical theater.

I still really didn’t know if I was interested in him. He was so quiet, for one thing—even quieter than I was. How could that ever work?

But we started Facebook messaging a bit. After their honeymoon, Kim invited me over for “dinner with a few friends,” which ended up dwindling to just Anthony and me, Kim and Cody—the first of many “double dates,” though we didn’t know it at the time.

And then right about Christmas (Kim’s wedding was in November), Anthony messaged me again, asking if I’d like to go with him to see the new movie, Saving Mr. Banks, which we were both interested in seeing.

And I said yes. Even though I did have a crush on another guy friend at the time. But the interest didn’t seem reciprocated, so…what did I have to lose?

Before long, I started to get glimpses of just what a treasure this quiet man was. And thus began our love story.

Maybe it doesn’t sound too romantic. It’s not exactly the Hollywood bump-into-each-other-and-feel-an-instant-spark story.

But I’ve been realizing lately that few real-life love stories actually start that way. Some do, but when I think of my parents, my aunt and uncle, and other close friends and family with wonderful marriages, many of them weren’t attracted to each other at first. Not that they were repelled by one another, but it took some time of actually getting to know the other person before sparks really began to fly.

Yet in talking to young women in my life, it seems we often still think the sparks have to come right away, or else it’s not meant to be.

So I wanted to share our story, over these next few months. Now that Anthony and I have celebrated the one-year anniversary of our marriage, it’s fun for me to look back and remember too. And maybe it might encourage some of you, to see what it looks like when two real people fall in love…and that sometimes it looks more like Lizzie and Mr. Darcy in Pride and Prejudice or Marianne and Colonel Brandon in Sense and Sensibility, where love blossoms gradually, than a typical romantic comedy.

So come along with us, and hear one story of how the Lord wove two lives into one.

I hope you enjoy the journey.

So what do you think of “love at first sight”? If you’re married, were you attracted to your spouse when you first met? If you’re single, do you think our culture sets us certain expectations in this regard? Do you look for that “spark,” or are you willing to take a chance on getting to know someone you might not be drawn to at first? Please comment and share!

12 comments on “Our Story: How I Didn’t Fall in Love at First Sight”