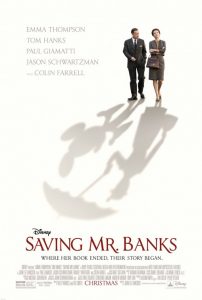 I hope you are enjoying this series! Read the first installment here.

Anthony and I had just had our first date. And I felt rather discouraged.

It’s not that we hadn’t had a pleasant time—we had. He’d taken me to see the new movie Saving Mr. Banks, and I’d greatly enjoyed it. I even noticed that we chuckled at many of the same parts. Afterwards we ate lunch at a Chipotle at the mall and chatted some, though I was a little dismayed at the challenge it was to keep a conversation going. Anthony asked me a total of three questions. (Looking back knowing my man-of-few-words now, I’m impressed! 🙂 )

I noted that he liked to read, appreciated the work of the Inklings (Lewis and Tolkien), and seemed to have high moral standards, by the way he discussed movies and literature.

Still, it all felt a bit awkward—especially when he brought me home and I stood around trying rather unsuccessfully to make conversation between Anthony and my dad. Eventually Anthony left, and I escaped up to my room and opened my laptop.

And found a string of emails from my critique partners, my “big sisters” who had been anxiously awaiting a report from their far-flung boundaries of the United States. Their messages back and forth made me smile and relax a bit.

“Didn’t she say he was picking her up at 9:30? [a.m] At least it’s not dark yet. I hope this means they’re getting a lot of the deep talk Kiersti wanted.”

“She doesn’t want us talking about it. She’s shy and it makes her uncomfortable. But I’m a mother!”

I didn’t mind—it was comforting to have friends who cared, and I had asked them to pray. I emailed a report:

“I’m not sure what to think right now, though we had a nice time. He’s a good guy—I just felt awkward sometimes because he can be so quiet….I initiated most of the conversation, though he did ask me a few questions. I just don’t know…I wish it didn’t all have to be so confusing….I’m truly trying to be open and not rule out the possibility. Anyway…thanks for your prayers.” 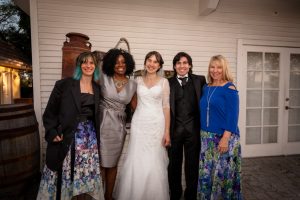 Anthony and me with my critique partners at our wedding–Sarah, Sandra, and Marilyn.

And was quickly bombarded with a virtual chorus of “My husband was just like that—you should have heard the (non)conversation at our first date—DON’T GIVE UP!”

They were all three, bless them, at our wedding a year ago. I’m glad I listened. 🙂

So Anthony and I continued Facebook messaging, a good medium of communication for us quiet people. Gradually our messages grew from a few lines to a few paragraphs. We started asking deeper questions, giving longer answers. After a few more weeks, our Facebook messages grew to letter size.

Some months later, I discovered the combined word count of our Facebook messages had reached over 90,000 words—the length of a novel! And I’ve no idea what it is now…

But slowly, I started getting glimpses of who this man was. Of his heart for the Lord, and for children and animals. Of the depth and independence of his thinking. Of his genuine interest in history and story.

I still wasn’t sure what to think about this relationship, looking toward the future. But I was beginning to be impressed with this man. 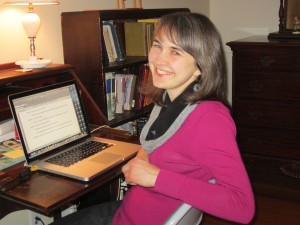 And soon, when I saw the little red notification number on my Facebook page, my heart would skip just a bit, and I would smile.

Because more often than not, it was another message from Anthony.

So, why do you think we sometimes jump too quickly to conclusions about people? How have you been thankful for the relationship advice someone gave you? Please join in and share!

2 comments on “Our Story: Of First Dates, Critique Partners, and Facebook Messages”