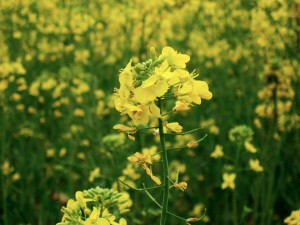 Sometimes God takes a whole lot longer than I’d like Him to.

I know this isn’t unique to me. Moses, Abraham and Sarah, Elizabeth and Zechariah, all had to wait a very long time for God to fulfill His purposes and promises for their lives. And the Israelites—boy did they have to wait. For God to deliver them from Egypt. To bring them back from exile. To bring their Messiah.

The Lord’s fondness for making us wait isn’t new to me, even if I continue to be surprised by the new ways He continually manages to work waiting into my life. I’ve even written about it on this blog before. But I’ve been realizing a new aspect of God’s “slowness” lately. Sometimes, waiting doesn’t mean nothing is happening. Sometimes, He may very well be working, but He’s just doing it slowly, almost imperceptibly, but nonetheless really.

Though sometimes He does work instantaneously, like raising Lazarus from the dead (though even then, Mary and Martha had to wait), He also said His Kingdom is like a tiny mustard seed that slowly grows into a large bush, or like tiny spores of yeast that slowly work their way through dough.

It can be so hard to wait sometimes, when I want things to change now, God to answer my prayers now. But maybe sometimes when I’m weeping and pounding my fists begging Him to work, He already is. I just can’t see it yet.

I’ve thought of this in researching the 19th century abolition movement for my next novel manuscript. Men and women had been campaigning for the end of slavery for about forty years by the time the Civil War began. And when in 1857 the U.S. Supreme Court declared in the Dred Scott case that a black man “had no rights which the white man was bound to respect,” the abolitionists must have felt all their work had been in vain.

Yet whether they realized it or not, they had slowly, incrementally changed the environment of the American conscience, at least in the North. Through the tireless writing, speaking, campaigning, and praying of people like Frederick Douglass, William Lloyd Garrison, Harriet Tubman, Harriet Beecher Stowe, Sojourner Truth and Angelina Grimke, people’s minds and hearts had been swayed. And the end of slavery was just a few years away.

More than once I’ve seen God answer a prayer I prayed for years without seeing, I thought, fruit—yet now I do, and I can see from this vantage point that He was working for quite some time, just on His own timetable. After all, when He sent Jesus into the world, not only did He wait thousands of years, but when He finally came, He entered quietly—a baby born to a poor young couple that only a few people even knew about. And He grew up just as quietly, waiting thirty years to even begin His ministry—which focused largely on loving and teaching and discipling twelve bumbling men not so very different from us. They weren’t instantaneously transformed either.

So let’s be encouraged, friends, in situations in our lives where we so desperately want God to work.

He may already be.

5 comments on “Mustard Seeds, Yeast, and the Slowness of God”