It’s the week before finals at our high school. And it shows–whether in my brain-fried students, two of whom called me completely different names the other day, or in myself, who later the same day stopped at a green light for no apparent reason, yielding my husband’s alarm and taking over the driving after we stopped at Costco. 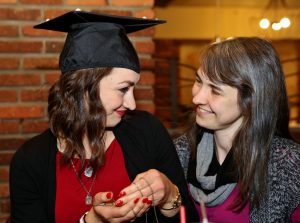 It’s a hectic time of year for many of us, perhaps for many of you–finals, graduations, transitions, endings, and new beginnings. A lot of it may be good, but it can also be stressful.

When I’ve gotten in the car the past couple of days for the long commute homewards, with my heart and breathing rate seeming a bit accelerated as they had throughout the day from just-so-much-to-do, I’ve put on the soundtrack for Joseph and the Amazing Technicolor Dreamcoat. Anthony has owned it for a while, and I’ve loved putting it on now and then, with all the sweet memories it brings back from when my family’s theater company put that show on a few ye 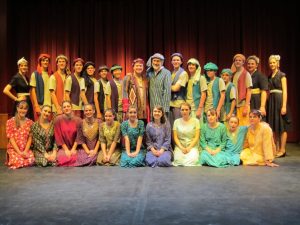 Often when I’m on the tired and stressed side, the familiar opening strains of music comfort and calm my heart. After living and breathing that musical for several months, I can sing nearly every word straight through (as can the rest of our cast still, I imagine), and the catchy tunes and threading story of God’s hand and faithfulness on one young man’s life–even if the Broadway version doesn’t overtly acknowledge that part too much–tend to always lift my spirits.

And it seemed to work yesterday too. At least, I didn’t stop at any green lights!

Actually, I think most of the music Anthony and I own is from films. We both love storytelling in all its forms. I’ve also found music from movies especially helpful when writing my own stories, since the music itself already is so story-infused. Hopefully some of it seeps over into my brain!

Why do so many of us love movie soundtracks, whether musicals or just Star Wars or Pirates of the Caribbean? Yes, it’s

great music. But I think it’s also music that tells a story…so the emotions and drama and conflict and hope of the story spring back to our hearts when we hear it, deeper than just the sound.

So, amid this rather hectic season for many of us, I thought it could be fun to share some of our favorite movie soundtracks. Maybe we’ll all get some good new listening material out of it!

I’d love to hear what movie music inspires you or brings you joy. Feel free to share links to where we can listen to/purchase your favorite choices as well!

And without further ado, here are a few of mine:

The Man from Snowy River. This beautiful soundtrack, while from a film set in Australia, inspired me through much of writing my first novel manuscript set in New Mexico Territory. My favorites are the Main Theme, Jessica’s Theme, Mountain Theme, and Clancy’s Theme.

Dances with Wolves
My dad introduced me to both this movie and its music–the movie as one of Hollywood’s first more accurate portrayals of Native American culture (Lakota in this case), the music for its stirring themes that he used in a Western movie we made with the staff of our mission organization as a team-building exercise. Since the main character is an ex-Civil War soldier at a deserted frontier military outpost, I started listened to this soundtrack some while writing my story set at Fort Tejon. Here’s one of my favorite tracks–The John Dunbar Theme and Buffalo Hunt are good too.

Winged Migration
We discovered this movie–and soundtrack–when my aunt and uncle gave this beautifully made documentary of bird migrations to my dad years ago (my daddy has introduced me to a lot of good movie music!). This soundtrack also goes with a story for me, though it’s one on hold right now. Check out the movie too if you haven’t–the visuals are quite stunning.

Then there are musicals…some of my favorite soundtrack music of all. Two old Rodgers and Hammerstein classics inspired me through another of my manuscripts…South Pacific, since the story had the thread of a Navajo Code Talker in combat in the South Pacific during World War II, and Carousel, with its themes of poignancy, loss, and parenthood. Even if they’re not as well known, I think these two musicals have some of these composers’ finest work. Hope you enjoy these peeks into both:

I love the Overture, A Wonderful Guy, Younger than Springtime, and Carefully Taught (even blogged about that one once).

So much good music here, but some of my favorites are The Carousel Waltz, If I Loved You, June is Bustin’ Out All Over, When the Children Are Asleep, Soliloquy, and of course You’ll Never Walk Alone

4 comments on “Music that Tells a Story: What Are Your Favorite Soundtracks?”