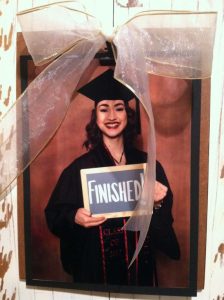 It doesn’t seem that long since she was graduating high school—in fact, I posted about it here. She seemed so grown up then, yet now, looking back, the eighteen-year-old Maren appears so young. 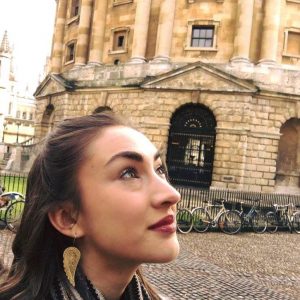 Maren at the Radcliffe Camera (part of the Bodleian Library) in Oxford, England.

Today she has a B.A. in Theater Arts, with four years of university under her belt, a semester abroad studying at Oxford, and a job this summer teaching theater to underprivileged kids, a dream that’s been on her heart since those high school years.

I’m so proud of her. 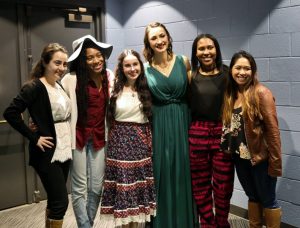 With some of her “D-group” girls after the opera she directed–they are all so faithful in supporting each other!

And so thankful for the Lord’s faithfulness. They haven’t been all easy, these past four years—but I’ve seen her grow so much, seen her cling to Jesus and find Him to be faithful in new ways. Seen her grow in confidence, character, and ability. Seen her blossom from a rather frightened freshman struggling with figuring out college and trying to make friends and find her niche, to a young woman who has graduated with highest honors, led a discipleship group of girls who have bonded as forever friends, travelled internationally on her own, directed multiple dramatic scenes and a full operetta, found multiple ways to perform herself—including at the Edinburgh Fringe Festival in Scotland—and grow as an actress, singer, and dancer despite the challenge of getting cast on main stage college shows as a theater BA (priority goes to BFAs), wrestled and grown through relationships, developed a heart for justice and reconciliation, ministered to youth within her community, and most of all, persevered in pressing closer to Jesus through good times and hard.

I love my “little” sister (I have to remember she’s really not little anymore) so much that sometimes I think it’s harder for me to trust the Lord with her than for myself, silly as that is. But over these past few years my faith has grown too, as I’ve seen His faithfulness in her life, even when things have been hard. I’ve learned yet again that He truly never leaves us or forsakes us—and t 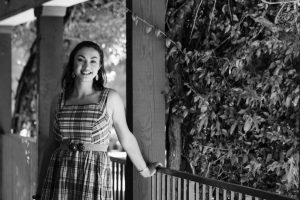 hat applies to my family as much as to me. (I know, obvious, but sometimes I’m slow.) And I’ve seen Him use her as a light for His Kingdom, as I believe He will even more in the days and years to come.

So as I sat in the throng of thousands of people Saturday evening, waiting for the commencement ceremony to begin, my heart swelled full with gratitude—in spite of the threatening rain clouds overhead. (About fifteen minutes before the hundreds of graduates were due to process into the stadium, the heavens opened with a downpour! Umbrellas popped up like mushrooms, and Anthony and I shared ours and a spare poncho with the huddling couple behind us.)

But then the rain lifted, a patch of blue sky opening just above the campus. And the sun broke through, a rainbow arching just beyond the graduation stage.

My throat tightened at this gentle benediction of the Lord’s promise yet again, for my sister and all the other young people graduating that day and preparing to set forth into the world for Him.

I think of some of my high school students too, seniors also about to embark on a new, sometimes scary, season of life. And I hope, as needed, I can remind them of His faithfulness—that the Lord is good, and He is faithful, and whatever the future holds, we never have to truly be afraid if we keep our hand in His.

Because we are loved.

Are you facing any big transitions at this graduation-filled time of year? How have you seen His faithfulness in your family? I’d love to hear your story!