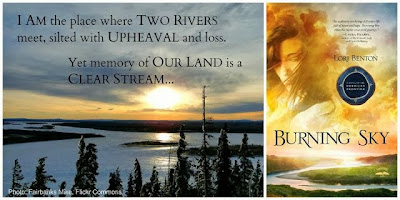 Welcome back to Part Two of our interview with historical novelist Lori Benton! I know you’ll be blessed as she shares from her heart.

7.     You do such a wonderful job of transporting us to the 18th century New York frontier—did you do much hands-on or on-site research?
Thank you! Will it surprise you to learn that while I’ve been to New York, I’ve never visited the southwest corner of the Adirondacks, where most of this novel is set? For that reason my research was exhaustive, including book/library research, Youtube, Google Earth, as well as interviewing individuals who do live there, or have lived there. That, and 24 years spent living on the east coast, visiting rural and mountain areas from Pennsylvania to Tennessee. I still remember what a humid day, or an evening dancing with lightning bugs, is like, though I’ve lived on the west coast for nearly that same length of time.
8.     How do your stories develop—do you do lots of plotting or outlining, or do they happen as you write? Do you discover your stories in layers?

I need to have a clear idea of where the story is going before I can begin it, primarily because the plot often hinges on historical events. I need to know the story arc I have planned for the characters works inside the framework of the historical record. And stories simply pour out on me in the beginning (before the actual writing has begun). I have to get them down in a rough outline form during that stage, however long it lasts, even if I’m not exactly sure of all the details or how one bit flows into the next. In fact I don’t want to know it all. I want to leave room for surprises to happen on any given writing day, weeks and months down the road. That’s part of the fun. But I do need a road map, for my own sanity.

I write multiple drafts of every scene. Tinkering, or fiddling, best describes how I work. I’ll write a few sentences, go back and play with them for a bit, rearrange the phrases, the sentence length, the word choice. Add some. Delete some. Write a bit more. By the time I’ve completed a 1500 word scene I’ll likely have been over it five or six times, it’s the end of the work day, and I’m exhausted. But I don’t stop there. Most of the scenes that exist in Burning Sky have been edited several dozen times. Some much more.
9.     Why do you think historical fiction is worth reading and writing? What authors have inspired you?
It’s worth it to me because it enriches my knowledge of history and my understanding of human nature. The list of authors who have inspired me is long: Diana Gabaldon, James Alexander Thom, Stephen Lawhead, J.R.R. Tolkien, C.S. Lewis, Ellis Peters, Tony Hillerman, Sara Donati, Francine Rivers, Liz Curtis Higgs, Susan Meissner, Laura Frantz, Catherine Marshall… to name a few.
10.     You just named many of my own favorite authors! Is there anything special that God has taught you as you’ve journeyed with Willa, Joseph Tames-His-Horse, and Neil MacGregor?
Yes, there is. It harkens back to why I chose Neil MacGregor as my favorite character. One of the themes in Burning Sky is redefining oneself after a significant loss. Many of the characters in the story are on that journey but Neil MacGregor—the Scottish botanist and physician aided by Willa Obenchain—has a journey that in some respects mirrors my own. I created Neil years ago as the hero of a story different in genre and setting from the one he now inhabits. While the losses Neil suffered in that early manuscript are similar to what they are now—due to a debilitating injury—the way in which I envisioned his dealing with them was vastly different.
In 1999, halfway through writing that story, I was diagnosed with Hodgkins Lymphoma, a cancer of the lymphatic system. Months of chemotherapy and radiation eradicated the cancer, and the side effects I experienced were relatively mild, except for one. It’s called chemo fog. It settled in shortly after the treatment ended, and I was blind-sided by it. Anything resembling concentration was beyond me; my memory for things like plot threads and character arcs was almost nonexistent; I couldn’t retain anything I read by way of research. After a year or two of frustrated attempts, I reached the dispiriting conclusion that I was no longer able to write the type of novels I’d been creating before my diagnosis. A vital part of my identity was lost. For all I knew, forever.
But God was doing a work in me, a long-term work of submission and trust, of giving my heart’s desire to write completely into His hands. But the desire to write never died. I continued to pray, and wait. It would be nearly five years before the fog lifted enough for me to feel ready to tackle the mountain climb that is novel-writing. For many months I took it in baby steps, but waiting for me at the base of the trail was the character of Neil MacGregor. I knew I had to find him a story to inhabit.
Eventually I set him down on the New York frontier, and discovered that I had gained a completely different outlook on Neil’s losses and challenges. God hadn’t taken away his heart’s desire to be a botanist, even as He didn’t take away my passion to write when the ability to do so was absent. But Neil is (thankfully!) no longer the defeated, self-pitying character I originally allowed him to be. He is aware of the challenges that stand between him and his goals. At times he still struggles. Yet he possesses a faith that’s been refined through loss and a subsequent submission to God’s will. He’s not afraid to step out in his calling, and trust that God is going to supply his lack.
It’s been a blessing to watch my own journey reflected in his.

Comment below with your name and email address for one more chance to win a signed copy of Lori Benton’s beautiful novel Burning Sky! The winner will be announced on Tuesday. Thanks so much for stopping by to visit with us. The Lord bless you!

15 comments on “An Interview and a Giveaway: Lori Benton and Burning Sky! Part 2”