Last week my friend Jennifer Major presented a question I’ve been pondering: “When did you know the story owned YOU? 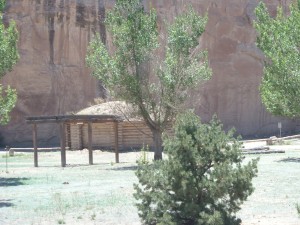 Hogan at the Navajo Nation Museum.

Jennifer and I both write about Navajo history in our novels and have been blessed with the same Navajo/Anglo family to take us under their wings and teach us much. So today, we decided to do a special simultaneous post on when these stories became not just stories we were writing, but stories that we had to write—stories that have shaped us as much or more than we’ve shaped them.

So, Beneath a Turquoise Sky, my first novel, yet unpublished but still the one closest to my heart. When did it begin to “own” me?

…I talked to a Navajo girl at my university, that final semester when I was working on the screenplay that became my novel? Her grandmother had attended a boarding school like the one in my story, and what she told me of how her grandmother would run away from school, the punishments for when the children spoke their own language, and the suspicion her grandmother still bears toward bilagáanas (white people) due to the Long Walk, deeply impressed my heart and my manuscript. 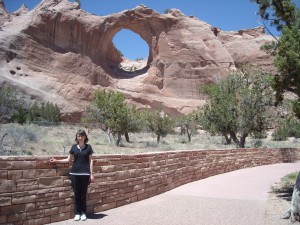 Me in Window Rock, AZ.

…Or was it when my college professor asked me if I were going to “finish this puppy,” the screenplay I’d begun in his class? We’d only had to finish half and then give a full treatment for the grade. I’d never written anything near this long, so his challenge once I graduated gave me pause. Thinking of all I’d been learning about the boarding schools and the tragic chapters of history so often edited out of our national consciousness, a quiet conviction entered my heart. I said, “Yes.”

…Or when I went with a group of Micronesian believers to northern Arizona to support and serve a Christian Navajo family? As they celebrated their granddaughter’s first birthday with a grand outreach to their relatives and community, I started to learn more who the Diné really were, more of their dignity and heritage and communal consciousness, as well as what it really means to serve…and how traditional missions to Native Americans hasn’t done that very well. Some major plot points in my story changed after that trip.

…Or was it when I read Richard Twiss’s book One Church, Many Tribes as part of my continuing research for this continually developing story? At least once I stopped reading for a bit, the sense of shame and horror overwhelming as I read of the hurt and damage done by my people to the Native peoples of this land, often in God’s name. Hard to read, but definitely shaping the “why” of my writing.

All these instances deepened the hold this story had on my heart. But I think the day of no turning back came when I stepped off a train in Gallup, New Mexico, to the welcome of a couple with graying hair and warm smiles—the husband Navajo and the wife Anglo—who opened their home and history and hearts to me like I never could have dreamed.

As I spent the next five days with them, as they took me all over the reservation and sat up late talking with me, as we looked over my draft and the husband corrected my Navajo, I came to realize my story was not just a story—it was people, real lives, real history. As I walked through the Navajo Nation museum with them and heard how only a few generations ago, U.S. soldiers gave the Diné blankets infected with smallpox in an effort to wipe them out, the burden grew on my heart till I asked—and received—my Navajo host’s forgiveness for all the hurt my people had done to his. And this story entered into m 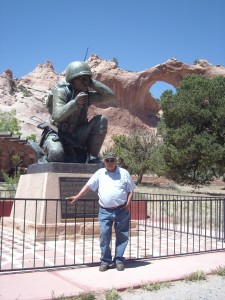 My host at the Navajo Code Talkers memorial.

y heart in a way that could never be torn free.

My young Anglo teacher Caroline and Navajo herder Tse became more than characters on a page to me—they became representatives of my friends, as well as their broader family and community, and all the faith and love and struggles and heartache that go with them.

So…that’s when Beneath a Turquoise Sky began to own me. Now click here to hop on over to Tales of the Redhead and read about how Jennifer’s story began to own her! I think you’ll be blessed.

2 comments on “When A Story Begins to Own You: Special Double-Post with Jennifer Major”