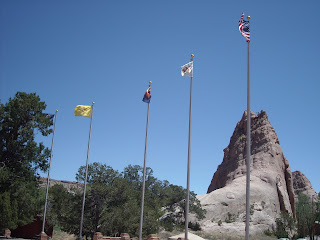 The warm desert wind whipped my hair across my face and snapped the flags above me, flags of New Mexico, Utah, Arizona, and the Navajo Nation waving beside the Stars and Stripes. I gazed up at the towering red rocks, the round hole to the clear blue sky, above the Window Rock Veterans Memorial. Below the Creator’s sculpture rose a man-made one, the bronze figure of a Navajo code-talker sending one of his history-altering, war-shifting messages during World War II. 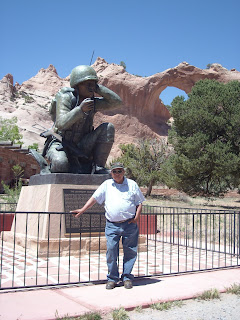 It was my first day visiting the family who would welcome me, not only into their corner of the Diné Tah but into their hearts and home, who would have perhaps more influence on this story I’ve been writing about the Navajo and the broken pieces of our country’s history than any other people. The husband is Navajo and the wife white, just like the couple who come together in my novel, yet I didn’t even know of this family when the Lord first put this story on my heart. He did, though, and must have been planning even then to touch our lives together.
But on that day last summer, I had only just met them, when they picked me up from the train that morning. I realized as I disembarked that I didn’t even know what they looked like—we’d only spoken on the phone, and they had read the early screenplay version of my story, before I started turning it into a novel. But when I saw a smiling older couple waiting, the husband brown-skinned with a long gray braid and a Marines hat, the wife with Dutch blue eyes and graying blonde curls, I knew I had found them.
They took me to breakfast at a local eatery where Navajo families sold their handmade jewelry, both out in front and passing from table to table inside. Afterwards we drove to Window Rock and visited the beautiful Navajo Nation Museum, with its glass-walled, hogan-inspired building, as well as an authentic traditional hogan outside near a grove of cottonwoods.
I had learned so much of Navajo history—I thought—in the months of research and multiple interviews I had done already. But as I walked through the museum and saw the pictures and artifacts in person, especially as I read the firsthand accounts of the Long Walk, when in the 1860s the U.S. Army rounded up the Navajo like cattle and force-marched them over 400 miles—in winter—to incarceration at Fort Sumner, killing many along the way, an aching pressure began to build in my chest. My host pointed out to me a photo of Navajo scouts that included his own grandfather, who had been taken on the Long Walk as a six-year-old child. And his wife quietly told me what hit her hardest: hearing how soldiers intentionally gave Native Americans smallpox-infected blankets, in an effort to wipe them out.
We got back in the car to drive to the Window Rock monument, but I struggled with an invisible wall between me and this gracious, grandfatherly man behind the wheel. It wasn’t anything he had said or done—nor really anything I had. But it was there. My people had done immeasurable hurt and damage to his, with enormous repercussions even today. I knew that, had written about it in my story. But it was another thing entirely to stare history in the face while standing beside one who, with his family and people, had been a recipient of that damage.
My hosts continued to chat pleasantly as we drove, and I answered. But the pressure in my chest continued to mount. I had wondered whether, while I was here, the Lord might want me to ask personal forgiveness in some way for what my people had done, and I sensed He might be prodding me to do that. But I didn’t know how. And, frankly, I was scared.

4 comments on “To Ask Forgiveness, Part 1”