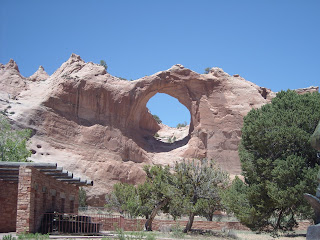 When we reached the Window Rock monument, I climbed out of the car to follow my Navajo host, while his wife stayed in the car to write an anniversary card for their son and his wife. The two of us surveyed the Code Talker memorial, where he showed me the names of his cousins in plaques around the base, then gazed up at the natural wonder in stone. Finally we circled around to the wall memorializing numerous Navajo heroes killed in combat. I took it all in: the Code Talker statue, the names, the evidence of so many lives given—Native American enrollment in the U.S. military is higher per capita than almost any other ethnic group—and I turned to my host and asked why. Why, with how the United States government has treated these first peoples of this land, would they give so much, so freely, for that government?
He considered my question thoughtfully and admitted I wasn’t the first to ask it. “One answer,” he said, “is that we had a common enemy.”
I began to understand. After all, wouldn’t those who have belonged to this land longest have the strongest drive to defend it, even if it meant joining with those they might not normally consider allies?
We turned to stroll back down the path, but my heart pounded, insistent with the prompting within.
I stopped. “Mr. Charles.”
He stopped too.
I drew a shaky breath. “I want to ask your forgiveness, for all the damage my people have done to yours. I know that doesn’t change anything, but . . . I’m so sorry.”
He was quiet a moment, then just said, “Thank you.” He pulled me into a hug. “You’re welcome at our house anytime,” he said. And I felt that I was not just being issued a polite invitation, but something far deeper, a precious gift I could have forever, if I took good care of it.
I blinked back tears. “Thank you.”
“For what?” asked a cheery voice, as his wife joined us. She noted the memorial beyond. “For being a veteran?”
My host explained what I had said, and told her he had forgiven me.
She listened, her eyes gentle with knowing. “That’s how healing happens,” she said.
We headed back to the car, stopping for me to buy a pair of turquoise earrings from a Navajo family selling jewelry beside their truck, and then soon to the two-story log hogan my hosts call home.
But something was different—that wall was gone. And a bond had begun, a bond that would strengthen over the next five days and into the months to come.
This family didn’t take lightly my fumbling request for forgiveness. They neither tried to pretend it wasn’t needed nor brushed it aside as inadequate. They just listened, and accepted it, and held out the hand of friendship and forgiveness in return. And began to teach me that, indeed, this is how healing happens.
A key to reconciliation lies in an honest apology, I am learning—in the two-way power of asking and granting forgiveness. I don’t fully understand it; it doesn’t seem that mere words should be able to do much about sins in past and present. But I know it is real. So does any believer, for what is our salvation in Jesus if not asking and receiving that undeserved gift of forgiveness? How else can any real relationships be healed or forged?
But first the apology must be made, that first step taken. And that has been woefully lacking in US/Native American relations till now. The United States government actually did officially apologize to the first peoples of this land three years ago, in December of 2009. However, the apology was hidden in another bill, and hardly anyone knew about it. How can an apology be genuine if it is not communicated to those whose forgiveness is supposedly being asked?
Mark Charles, son of my Diné Tah friends, has been asking that question all over the country this year. And this December, he has reserved the space in front of the U.S. Capitol building in Washington DC for a public reading of this apology. He is gathering Natives and non-Natives from across the nation, to join together in beginning a “new conversation” towards the genuine reconciliation and understanding so desperately needed in our country.
If you’re interested, you can learn more here. I won’t be able to attend this event, but I pray it may indeed start a new conversation, a new beginning—where repentance and forgiveness might begin to happen, and walls start to be broken down, one offering and joining of hands and hearts at a time.

3 comments on “To Ask Forgiveness, Part 2”