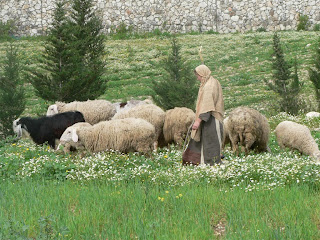 Joseph came home tired tonight. He tries not to let me see, but I know it wears on him, the talk of Rome and taxes and blood and fear in the marketplace. And he has been working so hard, with fewer people bringing him carpentry these days…ever since he took to wife a girl already showing with child.
I think he feels it more than I, being out in the village as much as he is. But it hurts me too, the looks Leah and Hannah give me at the well, they whom I’ve played and worked with since we could barely toddle after our mothers in the fields. But if I were in their place, would I act any different?
So I try to smile, to shield my heart and my baby from the accusing stares, to remember that it doesn’t matter what others think…not really. And when I turn my heart to thanksgiving, the hurt fades away. The LORD didn’t have to tell Elizabeth, to give me someone for those early weeks who would truly understand. He didn’t have to tell Joseph, to send an angel to him too. But He did. My Joseph, my husband whose anguish when he thought I had betrayed him is only matched by his gentleness and steady protection and provision for my child and me now.
When he came home tonight, with that tired pucker between his brows, I laid his hand on my belly and let him feel the little thumps and nudges. And Joseph’s smile lit his eyes again, and our laughter danced together, and everything was all right. Because we know—we know! And the tiny One kicking in my unsown womb keeps us from ever forgetting for long.

My mother brought me linen she had been saving for swaddling bands today. It brought it so close, somehow, made it so real, that He will soon be born. My hands trembled as I cut and folded the soft cloths. The angel told me, told Joseph, not to be afraid. Yet I am, a little, sometimes. But I try to keep clinging, keep trusting. Surely the God who planned all this, who chose us for this, will carry us through whatever lies ahead.
So I lean my head on Joseph’s shoulder in the fire-lit evenings, as we talk together in these last quiet nights of waiting. For He is with us…Immanuel. And that is enough.

2 comments on “Toward Bethlehem: Mary”