A little like Toward Bethlehem in December, I’m going to try a series leading us toward Easter–or as it was for Jesus and those who followed Him at this time of year two thousand years ago, up to Jerusalem. I hope we are all blessed as we turn our hearts to Him–to remember what He did, and what He’s still doing–this holy season. Now, come with me as we imagine what it might be like to be… 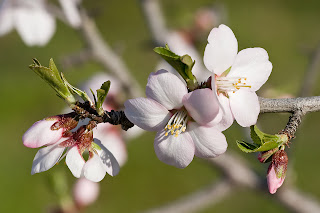 Andrew
It’s coming—I can feel it.
Ever since Jesus started heading south for Jerusalem this time, something has changed. There’s a new tension, a snap, in the air.
Peter feels it too, I can tell. Brothers can. Especially since he and James and John came down from that mountain with Jesus—Peter still hasn’t told me what happened up there, but sometimes I can sense him about to burst with excitement for what’s coming.
Coming—the kingdom. Restored by our Messiah at last. Can it really be?
I try not to feel jealous, not being one of the “inner circle.” Peter has always stood out—always been my hero and everyone else’s, a leader. I don’t mind, most of the time. I don’t like sticking my neck out anyway. I just like bringing people to Jesus, to see for themselves. I brought Peter, that first day after John pointed Him out to my friend and me. Then Phillip and I brought those Greeks who wanted to see Jesus. And I even brought that boy with a sack lunch to Him. I didn’t have much hope—just enough to try and see what He would do. And did He ever show us—all 5,000 plus of us.
I’m learning that it’s not that He loves some of us more than others. It’s more that He has different roles for us. And as He’s always trying to pound into our heads, those who seem greatest aren’t always so. When I start to let it bother me, He has only to look at me, in that way He has, or smile, or touch my shoulder, and suddenly it doesn’t matter that I’m only “Andrew, Simon Peter’s brother.” All that matters is I’m with Him. I know Him. And He knows me.
It’s uniting us anyway, I think, this mounting tension and expectation, as we climb through the Judean hills green with spring rains and smelling of almond blossoms and ripening grain. We’re all in this together—in with Jesus. He called us, didn’t He? Each one, to—what? To be part of His conquering army? Twelve isn’t much of a legion, but look what He did with five loaves and two fish.
We should be in Bethany, tomorrow. And after that—Jerusalem. The Holy City. The prophesied throne of Messiah. The place where the Pharisees and Teachers of the Law recently wanted to kill Him.
Our Zion. Will she welcome her King?