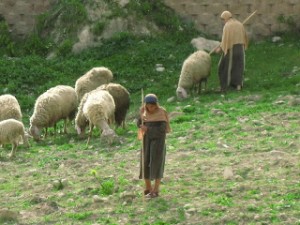 Last night I was at a prayer meeting where friends shared burdened hearts, feeling lost and without a sense of God’s direction for the future, aching over the pain of others and in the world. Then today I got an email prayer request for Christians in northern Iraq, where the militant group ISIS is wreaking havoc, violence, and death on old and young, especially followers of Jesus.

Sometimes I long for the Lord’s Kingdom to come and His will to be done on earth as in heaven. What about you?

I don’t have answers, really. Just hope to cling to as we weep and pray with our hurting brothers and sisters, in our neighborhoods and churches and across our country and the world. And these things below, reminding me of our hope secure and steadfast, that has entered behind the veil…I hope they encourage you too.

Michael Card’s “The Kingdom”—this song reminds me in a special way of that whole dimension we cannot see, yet that is so real. The “here, but not yet” of being citizens of that Kingdom.

A post from Ann Voskamp—I love her vulnerability, reality, and anointed writing.

“What every hard week ahead of you needs.”

And this beautiful Arabic version of the Lord’s prayer…we sang it in church this past Sunday, though in English except for the “Abana” (Father), as a way of standing with our brothers and sisters in the Middle East.

Finally, this true reminder of what is not yet, but someday will be: 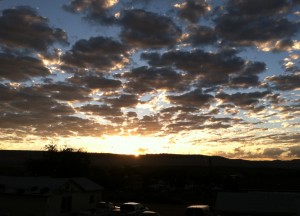 But with righteousness He will judge the poor,
And decide with fairness for the afflicted of the earth;
And He will strike the earth with the rod of His mouth,
And with the breath of His lips He will slay the wicked.

And the wolf will dwell with the lamb,
And the leopard will lie down with the young goat,
And the calf and the young lion and the fatling together;
And a little boy will lead them.

Also the cow and the bear will graze,
Their young will lie down together,
And the lion will eat straw like the ox.

The nursing child will play by the hole of the cobra,
And the weaned child will put his hand on the viper’s den.
They will not hurt or destroy in all My holy mountain,
For the earth will be full of the knowledge of the Lord
As the waters cover the sea.

Then in that day
The nations will resort to the root of Jesse,
Who will stand as a signal for the peoples;
And His resting place will be glorious.

2 comments on “Thy Kingdom Come”