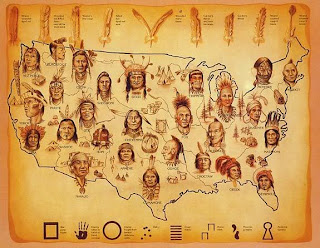 I don’t know quite what to think of Columbus Day anymore.

Not that I’ve ever exactly celebrated it. The closest to even acknowledging the day—other than it being a government holiday—that I can remember is through the Cupie Doll paper dolls I had somewhere around first grade. The little boy and girl figures had coordinated outfits for each holiday around the year, including Columbus Day. The boy became Christopher Columbus; the girl, Queen Isabella of Spain who funded the trip to—they thought—India. And the rest, we say, was history.

After all I’ve learned the past couple years of and from the native peoples of our land and the history of my ancestors’ interactions with them, Columbus Day feels rather sobering. There’s been a facebook card floating around the past few days that says, “Let’s celebrate Columbus Day by walking into someone’s house and telling them we live there now.” I see the point.

Sometimes I struggle with why God has seemed to bless America, when so much our country’s founding and expansion shamefully wronged and exploited the first inhabitants of this land, with people who claimed to follow the Lord flagrantly disobeying Him. And the hurt and damage done over the centuries is still so present today.

I guess there are no easy answers. So I thought I would just share some thoughts from a man of Navajo heritage seeking to further paths of healing and reconciliation through Jesus. I’ve had the privilege of getting to know Mark’s family a bit the past couple of years, and his following analogy really gripped my heart.

“I have often told people that being Native American and living in this country feels like I am an old grandmother who has a very large and beautiful house. My house has many rooms and is filled with finely crafted furniture. Years ago, some people came into my house and locked me upstairs in a bedroom. Today, my house is full of people. They are all throughout my house, eating my food, sitting on my furniture and thoroughly enjoying and making themselves at home. The door to my bedroom has since been unlocked, and I am able to come out of the room.

“But much time has passed, and I am now very old, tired, weak and sick. Yet the thing that hurts me the most is that no one has ever come upstairs to find me in my room, pulled up a chair next to my bed, looked me in the eye and simply said, ‘Thank you. Thank you for allowing me to be in your house.’ In fact, I think most people don’t even know whose house they are at in the first place.” (Read more at Reflections from the Hogan.)

And so I guess what I want to say this Columbus Day is just that—thank you, to the host peoples of this land. I ask your forgiveness, undeserved though it is, for my people who did not ask permission to come in, and I thank you for sharing your home with me.

2 comments on “Thoughts on Columbus Day”