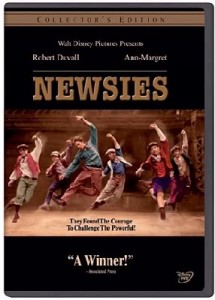 The movie version of Newsies

Recently, my family had the treat of seeing a live production of the Broadway musical Newsies. My feet tapped and heart swelled with delight as I watched the singing, dancing, show-stopping performance. Little puts a grin on my face as easily as top-notch musical theater! (If you’re the same way, watch this trailer—doesn’t it make you smile?)

But the show touched me in a deeper way too. The musical, after all, is based on the true story of the newsboys’ strike in 1899, when the “newsies” who sold papers on the streets of New York City banded together against journalism tycoons like Joseph Pulitzer and William Randolph Hearst to protest 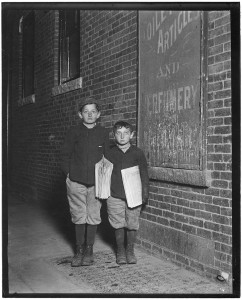 the raised price charged them for the papers they sold, which placed even heavier hardship on these already-mostly-streetboys. It must have seemed an impossible goal, for overworked children to force rich and powerful men to back down. But after two weeks of strikes, rallies broken up by hired thugs, and perseverance that led to the support of others, they did.

It made me think of this song from another musical—‘The Impossible Dream,” from the Man of La Mancha. Though I’ve never seen the show, this song has moved me many times with its nobility and courage, its determination to reach for the highest, for what is right, regardless of cost. The last bit always reminds me of Jesus too. What do you think?

Often in this fallen world, our dreams can seem impossible—dreams for hope, for justice, for achieving a goal or making a difference somehow. When I dream of being able to share my stories with more readers through publication, it can seem impossible when I consider the odds and the many rejections. When I dream of racial reconciliation and a time when our country—and especially the Body of Christ—comes together in understanding and unity regardless of our different colors and backgrounds, that can seem impossible when senseless tragedies happen like the shooting of Walter Scott last week.

But then I think of the newsies, and their David against Goliath battle they fought—and won. I think of the abolitionists, just a motley group of powerless men and women, black and white, attempting to take on the giant of American slavery, the underpinning of the U.S. economy so deeply entrenched it must have often seemed impossible to uproot. Yet by God’s grace, they eventually won.

For nothing is impossible with God.

What impossible dream are you dreaming today? Of course, not all our dreams are meant to come true. But if it is a dream the Lord has put in your heart, the size of the obstacles and the magnitude of its improbability really don’t matter at all.

4 comments on “The Impossible Dream: Newsies, Abolitionists, and Us”