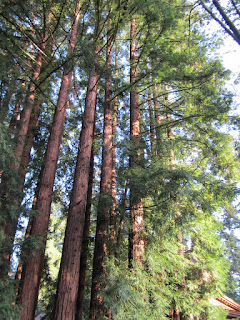 Little did I know when I arrived at the Mount Hermon Christian Writers Conference a year ago, slightly terrified of pitching to editors and agents—and of meeting and being mentored by one of my favorite authors, Lauraine Snelling—that I would gain not only incredible knowledge and connections, but a critique group who would become some of my most precious friends–nor that God would use the conference to help confirm His call on me to write.

This year, I was met and hugged by two of these friends moments after I arrived. And while this conference was not marked by as many mountaintop highs (or lows) for me as last year—though I did climb a real mountain!—throughout the five days wove the sweetness of belonging more, of deepening friendships old and new, of learning to better write for the greatest Storyteller of all. So I thought I’d share a few pictures of our writers’ time among the redwoods, along with the three things that stood out to me most about this year at Mount Hermon. 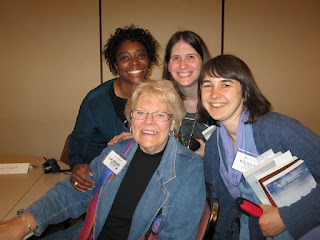 1. Relationships
Last year, I knew almost no one except my English professor who took me under her wing and brought me to the conference—and I’m so glad she did! This year, it was like a reunion—with two of my critique partners (we stayed up talking like college girls nearly every night), with our beloved mentor Lauraine, with other writers I met last year. I even reconnected with a few editors and agents…and continued to learn they are not so very scary after all. ☺ Here we are with Lauraine: Sandra, Sarah, and me. We missed Marilyn, the fourth member of our group–she wasn’t able to make it this year. I made several new friends as well.

2. Learning
Thanks to Randy Ingermanson’s Intermediate Mentoring Track, I learned to much better understand scene structure in novel writing—something I’d always felt hazy on before. Goal, conflict, and setback–I think I get it now. And scenes are either proactive or reactive. Not that I always know how to apply it…but it helps! Like Lauraine, Randy is one of those authors who not only writes bestsellers but also loves to help newbie writers grow. Those seem to abound in the Christian writing world, actually—such a blessing.

One day at the conference, Sarah asked me, “Who do you want to be?”—when we’re someday, Lord willing, one of the established authors who help make Mount Hermon happen. I decided I would want to either be a mentor, like Lauraine and Randy, or a member of the critique team like Gayle Roper, Kay Strom, Christine Tangvald, and all the others who graciously volunteer their time to help us newbies. I’d love to someday give other new authors what so many have given to me.

3. Worship
One of the things I’ve appreciated most about Christian writers conferences—at least those I’ve been to—is how they keep bringing our focus back to the Lord for whom we’re writing. It’s so easy to get off track, to get discouraged or self-focused or compare yourself to others. Worshipping Jesus every evening, gathered in Mount Hermon’s simple wooden auditorium with “The Lord will be your confidence” set in white letters above the front platform, helped guard against that. There is such a sense of the Lord’s presence at Mount Hermon—perhaps because it’s been dedicated to Him since the camp’s founding in 1906. And the love of Jesus shines through the staff there too. And as we gathered and prayed and sang together—and then were treated to the joy of laughter and truth through Liz Curtis Higgs’s evening sessions—God tugged my heart back to center and closer to Him. 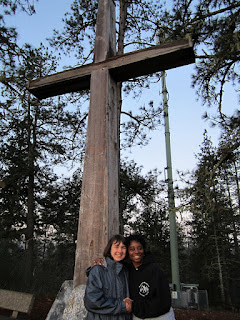 The Palm Sunday hike to the cross formed another highlight. Sandra had gone last year, and I’m so glad I joined her this time. There is something very precious about beginning Holy Week atop a cross-marked hill at sunrise.

I could share much more…but perhaps, especially if you’re of a writerly bent, you’d like to just come next year and see for yourself!