I went on a bus trip to heaven the other night.

We sat on padded chairs in the rearranged sanctuary of a community church and watched as a troop of Christian actors—the same group who gave Godspell a couple of years ago —brought C.S. Lewis’s The Great Divorce to life before our eyes. We joined these travelers given a chance to “take a trip” from hell to heaven…and see if they might want to stay.

I’d read through The Great Divorce in our Lewis anthology once I knew we’d be seeing the play, and even now I feel I’m only beginning to grasp some of the depth of this parable. Which, of course, has little to do with speculation about what heaven or hell may actually be like—Lewis makes that clear in his introduction. Rather, the story seems to aim mostly at our perspective, the vast gap between the lenses of heaven and hell, and how very different our lives on earth look from eternity. 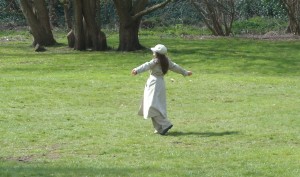 I think what struck me most was the incredible tenacity with which these journeyers from the gray town of Hell clung to whatever it was that kept them from entering into the “Joy” promised by the dwellers of Heaven’s mountains. A mother’s idolatry of her son…an artist’s craving for recognition and paint itself, surpassing his former love for what he painted…the façade another had so put up that the real self at last completely disappeared.

All they had to do, each of them, was to let go. To be willing to release whatever held them back and somehow realize that it was truly nothing, not in light of what was being offered.

But only one did…a man whose lust rode his shoulder in the form of a lizard, or in the play, a beautiful woman. He hemmed and hawed and excused himself nearly back to hell as an angel steadily offered to kill the beast and set him free. The man’s struggle was palpable—surely the creature wasn’t so very bad. It had given him some comfort over the years, was behaving quite well now, and surely wasn’t worthy of anything so drastic as killing it. Somehow, though, this man, seemingly no stronger than the others, found the courage at last to simply say, “Yes.” Though terrified, though crumpled with pain as the angel closed its fists on the lizard that had implanted itself in him, he was the one willing to be operated on, to let go. At last the sin lay dead.

And then the lizard rose, and so did the man. But both were transfigured, the lizard into a great stallion, the man into who he was always meant to be. Together they galloped into the fields and forests of heaven, beautiful, radiant, joyous.

So much of this walking with Jesus is that, isn’t it? The finally being willing to let go, to yield, and in that receiving so much more. The submission that leads to being set free. Saving and finding your life by losing it.

“Then Jesus said to His disciples, ‘If anyone wishes to come after Me, he must deny himself, and take up his cross and follow Me. For whoever wishes to save his life will lose it; but whoever loses his life for My sake will find it.'” ~ Matthew 16:24-25

“Let It Go” has been humming through my mind often lately, maybe through yours. Maybe that Oscar-winning Frozen song has a deeper message for us than we realize, though perhaps not in quite the way intended. In my Bible, the margin says Psalm 46:10 can be translated simply,

Doubtless many times of surrender lie ahead for me, but even in my fairly limited lifespan of knowing Jesus, it’s often been when I have “let it go” into His hands that He has really begun to work.

What do you think?