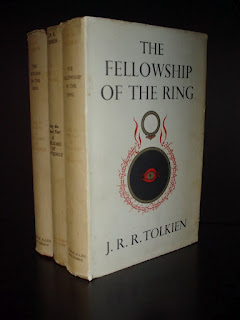 English major though I am, I read no Tolkien beyond The Hobbit until after I graduated college (perhaps a good thing most of my fellow students in our Oxford study abroad program didn’t know that 🙂 ). I made it through the first two volumes a year or two ago, but it wasn’t until this summer that I finally checked out The Return of the King from the library and took it with me on our family vacation.
I felt a bit like I was slogging through the first few chapters—probably partly because I had been out of the story so long (thank you, J.R.R., for the most helpful summaries of the first two volumes that prefaced this one). But as I persevered, I found myself, almost unexpectedly, drawn in. As the tension escalated, as Frodo and Sam inched their way closer and closer to Mount Doom, I grew increasingly gripped, thinking, “How on earth can they make it? But they have to—don’t they?” The evil seemed so incredibly strong, so dark, so unconquerable—and they were just little hobbits, walking right into its deepest lair. And yet—there was hope, wasn’t there? Surely there was, though I didn’t see quite how they could win. And yet…they did.
I understood, as I read, why Tolkien so adamantly refused any accusation of allegory in his writing. To try and find any direct parallel to Christ or the biblical narrative in The Lord of the Rings would horribly distort both, and such was never his intention. But his biblical worldview does come through, and I was struck to ponder several things. 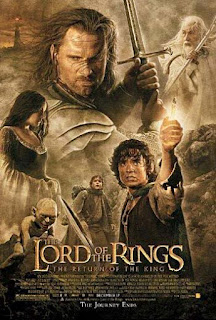 ~So many times the evil this little fellowship and their allies faced seemed so great, so incredibly dark and ugly, so seemingly unconquerable, at least by such a band as they. And doesn’t it often seem so in our world too—hunger and war, homelessness and shootings, sin, sickness, and millions of people still without Jesus. Yet over and over again in this trilogy, goodness and light are proven stronger than evil and darkness, even though their numbers may appear far fewer on the outside. Their courage and faith in persevering against Mordor encouraged my heart—as did their eventual victory.
~And then the hobbits themselves. I remember a college professor comparing us followers of Jesus to these small, seemingly insignificant people—who nonetheless, despite their weakness, frailty, and sometimes less than brilliance, end up playing the most key roles in the defeat of evil. I love that so often God seems to delight in working that way:

~While Frodo is far from a Christ figure, the necessity of his going right into the jaws of the utmost evil—the last thing the Enemy would have expected—in order to defeat it did put me in mind of Jesus, who took the very worst Satan, sin, violence, and death could deal out upon Himself…and in so doing conquered them all.
~From what I’ve been learning about novel-writing, I expected the climax to come quite near the end and then things to quickly wrap up—thus the time and chapters spent on the return of the hobbits to their Shire home and the subsequent battles first surprised me. In thinking it over, though, I saw the truth there—like D-Day in World War II, and for God’s Kingdom as well, once the key victory is won, the war is not yet over. Though Jesus has won the victory, there remain many battles to be fought before His reign is established and acknowledged over all creation once again.
~The lack of honor Frodo received in his home country also struck me as both sad and realistic—others will not always “properly” acknowledge us for the sacrifices we make and the work we do. Probably they usually won’t. But that doesn’t mean it wasn’t worth doing—and just as Sam and Merry and Pippin and Gandalf and Aragorn and the elves all knew the truth and loved and honored Frodo for it, so the Lord and anyone else who really matters will know, and we can find our approval and comfort in Him.
So lie my thoughts on The Lord of the Rings for now. Perhaps I won’t ever be as great a Tolkien buff as some of my fellow literature-loving friends; I may lack the patience, and fantasy isn’t my most beloved genre, though I enjoy it. But having read them, I think I’m the richer for it.