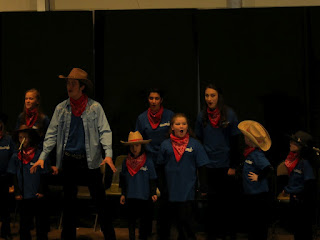 My dad gave the cue. The lights in the little theater went down. My mom opened the backstage door, and she and I sent fifteen kids and teens in blue shirts and cowboy hats filing out onstage. As the first notes of “Oklahoma!” rang out, I closed my eyes and pressed my fingertips together. Thank You, Lord…You are so faithful.

Last Saturday marked our theater company’s fundraiser performance, a musical revue featuring numbers from favorite American musicals. In the weeks before, I hadn’t been sure how it would all come together—we lacked young men to sing the male leads in two key numbers (a perennial problem for a young theater company, it seems), we hadn’t found a venue for our spring musical—which we needed to be able to announce at the fundraiser, and a nasty fever/bronchitis was creeping through the cast.

But we prayed, and sent out requests to our prayer team, and prayed some more, and tried to keep trusting. And the Lord provided an absolutely wonderful theater for our spring show—such that we could sign our contract with Rodgers and Hammerstein in time to announce our upcoming production of Cinderella—and two of our alumni guys stepped up to play Curly and Harold Hill in “Oklahoma!” and “Seventy-Six Trombones.” And we saw God’s faithfulness, even as my own sister came down with the bronchitis bug the week before.

Even at dress rehearsal, several numbers (filled with wiggly little people) seemed to have a ways to go before being quite performance-ready. Then we went home and put my sister to bed with a fever of about 102. But surely, somehow, the Lord was going to come through—because Showlights is His company, and we’ve seen Him be faithful so many times before. 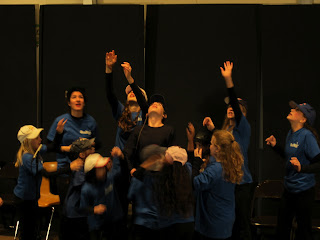 My sister’s fever was gone in the morning, and other sick performers were feeling better too. Once the show began, numbers that had wobbled in rehearsal stood strong onstage. Despite coughing fits backstage, my sister “nailed those high notes,” in one actor’s words, as West Side Story’s Maria. Charlie Brown did his best ever in “Baseball Game,” our wiggly little ones shone in “Put on a Happy Face,” and the evening finished with a rousing rendition of “Freedom” from Shenandoah after my dad reminded the audience that Jesus is the only One who can truly set us free. Thanks to the incredible generosity of many, we even raised an unprecedented sum to help cover expenses for our next show.

I came home that night with such a thankful heart. But even before I went to bed, my mind started spinning with new worries, new fears, new anxieties. Today I struggle with still new ones. And I wondered why, when I’ve seen His faithfulness over and over and over, I keep worrying, keep fretting, whenever a new seeming impossibility raises its head. It seems that I expect a problem-free life to be the norm, that once one set of difficulties is overcome, we should get a break for a while. Sometimes I sure feel like we need one.

But then, I suppose, we wouldn’t have many chances to see what God can do.

And then I remember He promised us things would be hard. He just also promised that He would have the victory.

“In the world you have tribulation, BUT take courage; I have overcome the world.” ~John 16:33

“Many are the afflictions of the righteous, BUT the LORD delivers him out of them all.” ~Psalm 34:19

“Weeping may last for the night, BUT a shout of joy comes in the morning.” ~Psalm 30:5

And after the very darkest of days in all history,

It is so easy for me to forget His faithfulness. Maybe that is why God urged the Israelites to remember, why they had books and psalms and festivals and stone piles to remind them of it…of Him.

I’ve started trying to do that too, writing down in my journal the darkest times and the high points, the times when I can’t see how God is going to come through and then the times when, incredibly, He does. Then once in a while I go back and read through and see, “Wow, I forgot I was so worried about that!” or “Lord, You are amazing.”

And so, for those things for which now I can see no answer, I must remember that we walk by faith, not by sight.

Because of His faithfulness.

6 comments on “His Faithfulness”