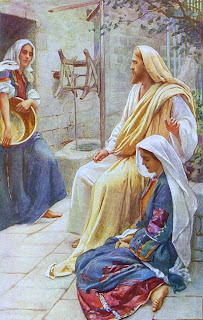 The heat from the cooking fire dampened her face and plastered her hair to her forehead. Duck roasting, stew bubbling, bread baking. She glanced into the front room, irritation rising like the steam from the lentil pot.

Her sister still sitting.
Of course, it was a good thing to listen to Jesus. A very good thing. She’d like to do that too. She would, later, at the appropriate time. But someone had to get the dinner around here. And as usual, that someone was her.
Seasoning the stew, she strained to catch a word here and there. Her sister’s rapt face pricked her annoyance higher. Their laughter sounded, and she gave the pot a hard stir. Stew splatted over the side and sizzled into the fire.
That did it. She threw down her apron and marched out of the kitchen.
“Lord!”
Silence fell. He turned to look at her. So did Mary, a hint on her face that she knew what was coming, and Lazarus, halted mid-grin.
She addressed her words to Jesus, though aiming them at her sister. “Do You not care that my sister has left me to do all the serving alone? Then tell her to help me!”
Mary lowered her gaze. But Jesus met her eyes as she stood there in the doorway, her hands clasping her elbows, shaking with frustration.
“Martha, Martha.”
His voice, the way He said her name, calmed her shaking. He didn’t sound angry—either at her or at Mary. Just a little sad—almost as though, rather than realizing Mary should have been in the kitchen, He wished Martha had been in the front room with them. But she couldn’t—didn’t He get that? Didn’t He realize how hard she’d been working to prepare a lovely meal…for Him?
“You are worried and bothered about so many things; but only one thing is necessary.” He touched her sister’s shoulder as she knelt there at His feet. “For Mary has chosen the good part, which shall not be taken away from her.”
She held his gaze a moment longer, then lowered her eyes and turned away. Back in the kitchen, the scent of charred meat sent her flying to snatch the duck from the ashes. Sinking to her knees on the cold stone floor, she stared at the burned meat, the spilled stew. All salvageable, but not very impressive. But would He have really been impressed anyway…by this?
She stood and looked into the front room once more. They were talking again, more quietly now. As if He sensed her watching, Jesus glanced over at her and smiled, then tipped His head in invitation.
Martha pushed the stew pot to where it would keep warm, drew a deep breath, and went in to join them.
From Luke 10: 38-42
The Lord took me to this passage again this morning; He often needs to, it seems. I’m often not expecting it, but when I read about these two sisters, friends of Jesus, so real and human, I so often go, “Oh, yeah. Right…I forgot again.” 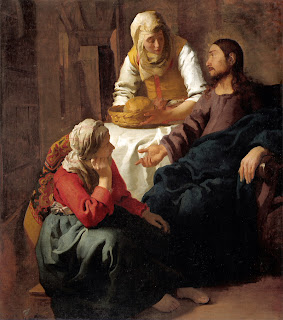 It’s so easy to get caught up and “distracted with all my preparations,” with all the busyness and all there is to do—to constantly think (and sometimes say) to myself or my family: “Don’t you think you should do–?” or “Don’t you need to–?” or “Why don’t you–?”
To think I’ve got to have it all under control, or else. To be, well, like Martha.
I love Martha, and I empathize with her—with her strengths of responsibility and servanthood, and her weaknesses of sometimes making those more important than relationships and the One actually important thing.
So today I started imagining what it might have actually been like to be there that evening—to be Martha. To see Jesus respond to her as He does still to us, patiently, lovingly, opening our eyes and turning our perspective on its head, by showing us His. And to think what I hope her response to Him might have been–and what I want mine to be.