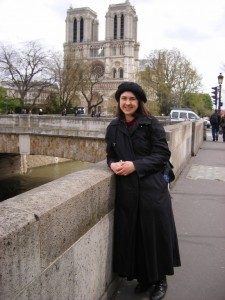 By Notre Dame and the Siene.

My family and I spent one day in Paris nearly eight years ago.

And I fell in love with that city.

I know not everyone loves the feel of Paris…some people very dear to me don’t. And I was a bit surprised myself. I’m not that much of a big city person in general, and I thought Paris must be a bit overrated. How special could this fabled city of Light and Love, really be?

Then I experienced April in Paris, and I changed my mind. 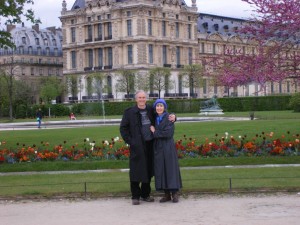 My parents in the Tuileries Gardens.

It was a whirlwind trip through Europe when my family got to come visit after my semester abroad at Oxford, and we were headed to spend most of our days in France in the tiny village of Lutzelbourg staying in the guest house of a lovely French Christian family. 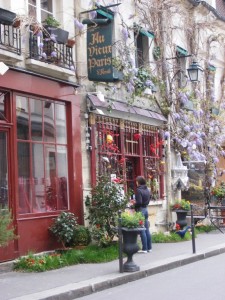 But we had that one day in the capital city. Perhaps it made it even more magical, the limited time. We walked through the pink-blossomed, tulip-strewn Tuileries Gardens and stood in awe in the vast candlelit dimness of Notre Dame. We took pictures by the Seine and the outside of the Louvre (no time to go in), had lunch in a sidewalk café with a delightfully gregarious French waiter, and dinner along the Champs Élysées. We made our way to the other side of the city about 11 o’clock at night to view the Tour Eiffel lit up across the river, and finally crammed into the metro with the rest of the late night Parisian crowd.

No doubt our experience was greatly blessed by the fact that my mom, a French major who spent her junior year of college studying at the Université de Montpellier, still speaks quite fluently and proved a beautiful tour guide. But however much that helped, truly I found the Parisians a gracious people overall.

And I have grieved for them these past couple of weeks. And for so much of the rest of the world.

I was touched by my homeroom students’ requests during our prayer time this Monday morning. The first hand up was to ask for prayer for Paris. In quick succession followed requests for other parts of the world also bombed at the same time, yet receiving far less attention…like Beirut, where one student has loved ones, and Baghdad. Another young man asked for prayer for Ethiopia, where he has lived much of his life, and where they desperately need rain.

Usually their prayer requests are far more locally-minded—the biology test today, an injured wrist, family issues. All very valid, but this week I was moved to see their hearts turned out to the world. 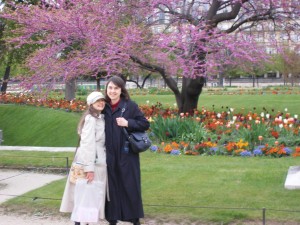 With my sister in the Tuileries Gardens

And I hope our hearts have been as well.

I grieve for Paris, but I also grieve for our tendency to rate some parts of the world as more important for others. When places like Iraq and Lebanon and Cameroon and Tunisia are bombed—as they have been so many tines, and again these past weeks—we don’t tend as much to change our profile pictures to stand in solidarity with those people. I know many Americans have a strong emotional connection with Paris (I do!), and that is part of our reaction. But it is also true that we in the West often tend to be more concerned about tragedy in parts of the world that are more “like us,” and to brush other crises off as “That’s just the way it is over there.”

I don’t want to be that way. And I want to remember that Muslims are people, the vast majority of whom are not terrorists, and that Muslim peoples and nations have been more hurt by terrorism and ISIS than any Westerners have yet.

It’s hard to know how to respond sometimes, with such horrific events around the world, isn’t it? This blog by Ann Voskamp helped me. So did this video of a man who took a risk to be vulnerable on the streets of Paris: 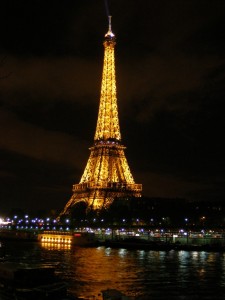 And I remember the words posted by another friend after the attacks, from a man well familiar with violence and injustice:

May God give us grace so to live.