My family went to a production of the musical Godspell last night. One of the directors of our little theater company was in it, and none of us except my dad had ever seen it performed on stage—only the movie version, purported to be far inferior. We’d often wondered if it were a show we’d want to put on sometime—and to top it all off, it was free! So off we went.

As I watched, and laughed, and cried, I began to see why people love this musical so, even though it was not originally written by a believer. One of the beauties of Godspell is that each company is free to make it their own, and the group of King’s players we saw last night surely did. Their humor and ad-libbing proved fresh and funnybone-tickling, the acting top-notch, the voices clear and beautifully blended, the dancing on-beat and enthusiastic.

But beyond that, these performers truly knew the Jesus they were portraying and performed for Him. I know Him too—yet as I watched the story unfold on stage, saw this Man teach and love and correct and comfort this motley, often childish bunch of rainbow-colored followers, I saw things afresh—things I knew in my head but sometimes forget in my heart.

I saw how Jesus came and lived as someone whom people actually knew and loved—as their God and King, yes, but also as their friend. I saw in a new way how much He loves us, how patient He is with us, kooky, dense, mixed-up sheep that we are—even when we must grieve and frustrate Him so. And how when we get all out-of-focus and worked into a frenzy, a word and a touch from Him can bring instant calm to our troubled hearts. 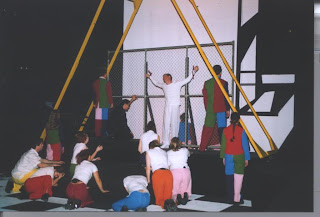 As Jesus approached the cross, I trembled with His grief and even fear, brought by His willingness to be subject to our humanity, as He begged His Father to let the cup pass Him by if possible, yet cried, “Thy will be done.” My sister, sitting beside me, wept as He let Himself be secured to the makeshift cross with red ribbons—Godspell’s symbolic nature keeps it from being too graphic while keeping the emotion of the crucifixion—and struggled to breathe as His life seeped away and His disciples wailed. And then He died. And they carried His limp body out on their shoulders, and it seemed all was over.

I knew Godspell wasn’t originally written with a resurrection, forming the only truly unbiblical part of the show. I knew some Christian companies added it, but I didn’t know for sure what this one would do. In the dim red light, the disciples re-gathered on stage, some weeping, some spent with grief, the young man representing Peter too overcome with shame to even accept comfort. My heart pounded as I waited—would they? Would He?

Then a white light shone from the back of the aisle, and a strong tenor voice cut through the disciples’ lament, reprising the opening “Prepare Ye the Way of the Lord.” And laughter choked with sobs in my throat as the disciples, faces transformed, raced to throw their arms around their living Lord coming to meet them.

As I write this, I’m moved almost to tears again. Because this was not just a play that someone made up. This is real. This is what this season of Lent and the Holy Week it leads up to are all about. Jesus is alive! We know and follow and are forgiven by the blood of and celebrate the power of not a dead prophet but a living, risen Lord who has defeated death and will someday abolish it for always. We have hope in this world of darkness and sin and hate and hurting. Because of Jesus who became one of us in the midst of all that, who has power over all that even now.

I want to follow Him. I want to know Him more, and remember that He is a real, living Person right now, not just someone to read about in the Gospels. Lord, help me see You more clearly, love You more dearly, follow You more nearly…day by day by day.