I’d never been part of a flash mob before—or seen one except on YouTube—until this weekend. 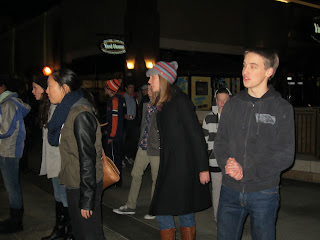 Saturday evening, the senior division of our little theater company gathered outside a movie theater at an outdoor mall. The night air nipped cold for southern California, so we bundled in hats and scarves. Trying to act as if nothing special were about to happen—yet keeping flyers and my camera within easy grabbing—I surreptitiously watched our young actors stroll by each other like they’d never met, apparently absorbed in texting or cell phone conversations like any teen or young adult at the mall on a Saturday night.
Then, the opening notes of “One Short Day” from the musical Wicked floated above the crowd. One of our teen girls stood alone, singing. Then another joined her. Heads started to turn. The music picked up, and several more jumped into the opening dance. Soon a semi-circle of onlookers had gathered in front of the theater, cameras and cell phones blinking as now our whole troupe sang and danced full out, harmonizing as they welcomed our impromptu audience to the wonderful Emerald City of Oz.
Suddenly, the music shifted, and our performers froze. A few bars, and they became the populace of 19th century France, launching into the intensity of “At the End of the Day” from Les Miserables, then moving into a shortened version of the Les Mis medley for our upcoming winter show. It was rather special to see them perform it in front of the theater where we had come as a group to see the film.
The response of people around us at the mall varied. Many loved it. I saw one couple exiting the theater when the wife grabbed her husband’s arm and hauled him back with an “I want to see this!” Other shoppers beckoned and phoned their friends to hurry and come see. Others, though, brushed us off or hurried past with barely a second glance. 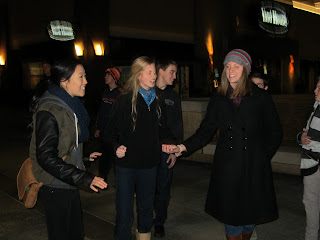 As I watched our young actors and actresses out sharing in the community—and tried to snap pictures, though the dark and people hustling by proved a challenge—as I watched their expressive faces and enthusiastic gestures, the way they threw their whole hearts into their singing and dancing and shone with Christ-light as they built the triumphant finale of Les Mis, I was reminded that the way some people responded didn’t really matter. With anything we do—acting, writing, sharing about Jesus—some will be drawn and respond and some won’t or may even reject our message, as in the parable of the Sower. All we need to worry about is to do our best, do it for Him, and leave the rest in His hands.
I also wondered—what is it about a flash mob that draws so many of us? There seems to be something magical about a performance suddenly springing out of a crowd of ordinary people, about beauty and story and song surprising us amid the humdrum. But that is what God does, isn’t it? Takes the ordinary and turns it extraordinary—takes us, and creates something beautiful.
I’m glad we could share a little of that with people the other day.