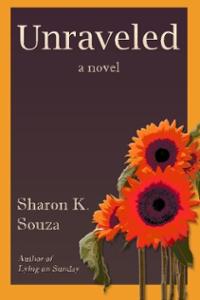 When I first read about Unraveledon the ICFW (International Christian Fiction Writers) blog, the storyline fascinated me enough to prompt me to comment on the post—thus entering a drawing to win the book. And yep, I won! Funny, it’s the third time I’ve won a book in similar manner the past few years, prompting me to think twice before commenting on such giveaways anymore, lest my sister reproach me for adding yet again to our hitherto overflowing bookshelves. Goodness, what’s with me and the Olde English verbiage tonight?
Anyway, a few weeks later my (hardcopy, as I requested, since I’m still awfully addicted to a book in my hands rather than on the computer) book arrived. I have to admit, when I first saw the simple, sunflower-adorned cover, I thought, “Oh—self-published.” And it was. Self-publishing is, I know, a growing and increasingly viable and respectable path for authors, and who knows but that I might need to travel it myself someday. But with some self-published books I’ve seen, I’ve felt regretfully, “Oh—this author has promise. If only they’d waited and studied the craft more and learned from others in the business rather than jumping into self-publishing this soon—this story could have been so much better.”
But Unraveledproved so different. From the first chapter—even the first page—the viewpoint of young 20-something Aria drew me in, and I was hooked. Excited to begin her first mission excursion, her first time in Moldova, and her first experience of a harsher world than she has known amid her loving, if eccentric, Jesus People extended family in California, Aria faces tragedy and hope in a way she never has and must learn whether her faith is real or just handed down from her family—and whether God can be trusted, even when we don’t understand.
As I read, I began to understand why Sharon K. Souza might have chosen self-publishing rather than the traditional route, though the quality of her writing shines truly top notch. Maybe it gave her freedom to include bits of Aria’s personality and quirky family history that could have raised a conservative editor’s brow. Maybe it gave her space to let Aria explore the hard questions we all tend to face at one time or another but aren’t always brave enough to wrestle with. Or maybe it’s just that American CBA publishers aren’t too keen on international settings or “missionary” stories right now.
At any rate, I would give Unraveled a five star review. I hope you’ll pop on over to Sharon’s website and learn more about her and her books, and over to Amazon where you can read a sampling of Unraveled. And I hope you’ll be touched by Aria’s story—and those she touches and whose lives and realities touch her—as I was.