Continuing the conversation from last week’s “Friendship as a Key to Racial Reconciliation.” 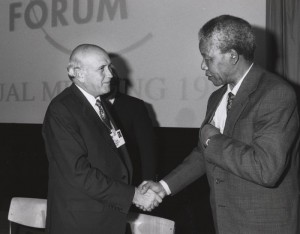 A few months ago, I saw the Mandela: Long Walk to Freedom movie with my dad. What a powerful story of a courageous and hugely influential man. But one thing that struck me from the movie’s title was that Nelson Mandela not only had a long walk to freedom—he had a long talk to freedom.

Mandela worked as an activist rebel leader as a young man, but after his decades-long imprisonment later in his life, while around him his country turmoiled through the birth pains of a new nation and the cracking walls of apartheid, he quietly and graciously met with leaders of the white majority. These people had long oppressed his and brought great suffering to him and his own family. But he was willing to meet, to discuss and listen, as long as they were willing to listen to him. These ongoing conversations, in which he graciously but firmly refused to back down from his demands, gradually brought about a remarkably peaceful transition in a nation that could have descended into total chaos and bloodshed—not that there wasn’t some of that anyway. But Nelson Mandela won the next presidential election by a fair majority and truly led South Africa into a new era.

Largely because he was willing to talk.

In recent years, I’ve learned that, just as I didn’t, a lot of European-Americans like me don’t particularly like talking about race—not because they’re racist, but because they’re afraid of being thought so, or maybe sometimes because it’s just scary. We tend to want racism to be a thing of the past, that doesn’t affect us anymore…and why can’t we just all get along? Hearing that the wrongs done by our ancestors to people of other backgrounds and colors might still be affecting them today, or that those of us with lighter skin maybe still have advantage and privilege in ways we’d rather not admit, can bring up unnerving feelings of guilt and defensiveness.

One of my critique partners and closest friends, Sandra Barnes, shared a scholarly article with me earlier this year on “Race Talk: The Psychology of Racial Dialogues.” It really brought up for me again both the importance of interracial conversation and the various emotions that tend to come up for us of different backgrounds when engaging in “race talk.”

But honestly, I think having these talks is the only way for us to move forward. I’m so thankful for the conversations Sandra and I have been able to have—sometimes in person, mostly by email, since we live on opposite sides of the country. Sometimes it’s been a little uncomfortable, and sometimes we’ve been afraid of offending the other. But it’s been so good. And the more we talk and listen to each other and invest in our friendship in other ways, the easier and less weird it is to talk about these issues. After all, in America we really do come from a medley of different backgrounds and experiences. That’s a good thing, not a bad one—why cover it up? 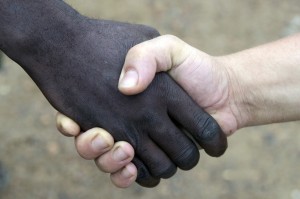 I hope we can start more and more to really think and thoughtfully process when racial issues come up in the news, rather than just reacting from our own biases and cultural experience. To be willing to take a step back and listen to each other—really listen. To learn from others’ experiences and have our perspectives challenged by one another. To invest in building genuine friendships with each other, even if it’s not always easy.

Recently my Navajo friend and racial reconciliation activist Mark Charles posted that, “Conversations for reconciliation are never easy. But if you can stick with them, they are almost always good.”

In my still-limited experience, that is very true. And I think it’s one of the main ways the Lord uses to bring us closer to that unity Jesus prayed for us:

What do you think? What has your experience been with “race talk” or conversations for reconciliation? Please comment and share!

3 comments on “A Long Talk to Freedom: The Power of Conversation for Racial Reconciliation”