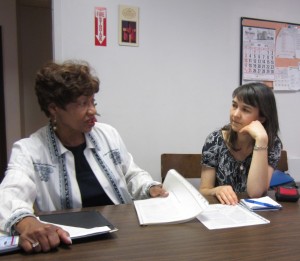 Sitting with and learning from Dr. Muldrow.

Sometimes history seems far away. Though we know it happened, the people in those grainy black-and-white photographs or rich-hued oil paintings seem to belong not just to another time but another world. It’s hard to fathom they once lived and breathed and loved and laughed and wept on the same ground we walk today.

Other times, history comes so close we can reach out and touch it…literally. That happened for me on this recent trip to Maryland and Washington DC.

We sat at a table within the building of 15th Street Presbyterian Church, my friend Sandra and my sister and I, as Dr. Tressie Muldrow shared the stacks of historical documents she had compiled for me on the history of this African-American church founded in DC in 1841. I’d wanted to use 15th Street as a site in my current novel-in-progress, as the church was involved in the interracial abolition movement my characters take part in. 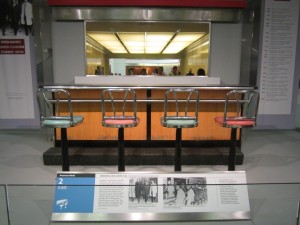 The lunch counter and stools from Woolworth’s, now in the Smithsonian.

I so appreciated all the time and input and materials she so graciously gave. But we really sat riveted when Dr. Muldrow started telling us about her own life. How as a college student in 1960 she participated in the Woolworth’s lunch counter sit-ins protesting segregation in Greensboro, North Carolina. How she and the other students had mayonnaise and mustard smeared in their hair, abused by white customers simply for sitting outside the “colored” section. How the demonstrators met together every evening for training and debriefing as they worked together for civil rights. Of the satisfaction she feels today when she visits the site of that restaurant and sees it gone, with a civil rights museum in its place.

We got to sit and talk and have lunch with this amazing lady, who sat on these lunch counter stools now in the Smithsonian Museum (see photo). We touched history.

A couple of days later, we visited Arlington National Cemetery, and stood on the site of the Freedman’s Village I’d been reading about in my research, where freed slaves were housed on the former estate of Robert E. Lee from 1863 to the 1880s. Today the area is mostly covered in graves of citizens of Freedman’s Village and soldiers who fought in the United States Colored Troops. It was amazing to stand right there and read the headstones. 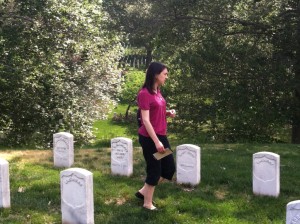 Walking among the headstones at what used to be Freedman’s Village in Arlington National Cemetery.

But on our way to that site—which we only found because we asked, there’s no marker I could see—we passed a headstone oddly marked with several stones placed on top. Wondering whose it was, I stepped to the other side to read the epitaph.

I didn’t recognize the name, but she did. So Sandra explained about Medgar Evers, a courageous Civil Rights leader who was shot to death at his home in Jackson, Mississippi, right in front of his children, because of his work for equality and justice. And we’d just “happened” upon his grave.

Last week, my sister and I were watching the movie The Help for the first time, though I’d read the book before. And soon we came upon a scene where a Civil Rights leader was speaking on the fuzzy black-and-white TV in the characters’ living room. It was Medgar Evers. We watched as he spoke, and as then as Aibileen had to get off the bus going home because someone had been shot near her neighborhood. When she got to Minny’s house, she learned it had been Medgar Evers.

And we remembered how just a couple of weeks before, we had touched history.

There were other instances when history came close on this trip for us, like when my sister and I had a history nerd freak-out moment upon encountering a dark blue and buff uniform that George Washington actually wore at the entrance to the American Revolution section of the Smithsonian. But I think the moments above stood out for me the most.

8 comments on “Touching History: Woolworth’s Lunch Counter, Medgar Evers, and Me in DC”