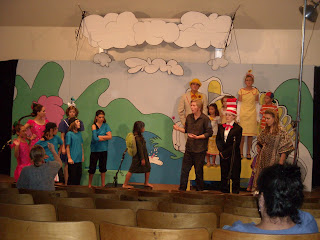 We humans are wired to hear stories. Perhaps this is because God created us in His image, and He is the ultimate writer of story—in history, in each of our lives, even in fiction through the parables of Jesus. I think all the best stories reflect His story in some way.

I loved watching the story of Seussical come to life these past two weeks of dress rehearsals (one is pictured here) and, finally, performances. Hearing the recorded music or reading the script is an entirely different thing from seeing a real live Horton battling earnestly to save the invisible planet of Who with its tiny persons. Teens and children become the characters through costume and throwing their hearts into their parts, and the story is lived before our eyes.

Though I know nearly every line and lyric, I still always got chills during the final scene, when Horton is put on trial for “talking to a dust speck” (the planet of Who, which no one else believes is real) and “loitering on an egg” (adopted from the flamboyant and irresponsible Mayzie—played by my sister ☺). Heedless of his own well-being, Horton begs the judge to save the Whos, insisting that “a person’s a person no matter how small.”

In church the Sunday before our show opened, we sang “Oh, the Deep Deep Love of Jesus.” One of my favorite hymns, it moved me even more than usual this week, I think because the story of Seussical lay so fresh in my heart. Horton’s sacrificial stand for the needy and vulnerable rendered my heart softer, turning it more readily to Jesus and His far greater sacrifice for us poor and needy sinners. When He went on trial for our sakes, no little Jojo thought up a great “think” in time to save the day. Instead Jesus’ life was taken, so that we could be saved.

There, I think, lies a story’s power—to touch and tenderize our hearts toward God. It seems Jesus used it that way—His parables didn’t give people all the answers, but they made touched hearts draw closer and ask for more. Nathan the prophet used it that way—as one of my earliest writing mentors pointed out to me, his story to David after the affair with Bathsheba struck far deeper than an outright accusation would have.

Story is not enough on its own. But I think hearts must be softened before minds can be changed. First God must replace our hearts of stone with hearts of flesh. Then, once we can hear Him, our minds may be transformed.

I hope hearts in our audiences were touched by the story of Seussical this past week. And as my dad shared about the Lord at the end of each performance, I hope they were touched even more by the true story of Jesus, which shines through this musical in surprising ways.