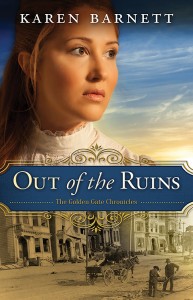 Out of the Ruins novel

Would you like to travel back in time to the 1906 San Francisco earthquake? Well, maybe not in real life, but how about in the pages of a book?

Author Karen Barnett‘s second historical novel, Out of the Ruins, released just this spring (following her very successful 1920s suspense Mistaken), and I had the privilege of joining her “Street Team” to review and share about this book. Her delightfully honest and historically accurate story touched me with its wrestling with “Where is God when He doesn’t prevent tragedy?” Now Karen has graciously agreed to join us here today! I hope you enjoy hearing from this lovely lady as much as I have.

It started years ago when I was flipping through channels and happened onto a PBS documentary about the San Francisco earthquake. The filmmakers included interviews with survivors of the disaster who had been young children at the time. I started thinking, “What would it be like to experience an event of this magnitude? What if I were separated from my family? How would I react?” Questions like these tend to kick off the story machine in my brain. It’s kind of like playing pretend.

The X-ray storyline came in during the research phase. I’d already decided I wanted to have a character with cancer and I had to find out how they treated the disease in 1906. When I stumbled over some information about early X-ray experiments, I knew I’d found a story treasure.

2. How do you primarily conduct your research? Do you enjoy research, or is it just a necessary part of the journey to get to the “fun part” of writing the story?

I love the research! I can spend weeks hunting down interesting rabbit trails, like the X-ray stories. I even found a 1904 X-ray manual and used it to get a feel for what the doctors might have encountered. The difficulty comes in selecting which tidbits of history to include and which to discard. There’s always the horrible temptation of using research as procrastination to avoid the scary work—the writing.

3. Who is your favorite character and why? Do you have to work to discover your characters, or do they just “introduce themselves” to you? Or both?

I related best to the introverted and unpolished main character, Abby, because she’s so much like me. Robert was the most interesting one to write, because in many ways he’s the opposite—ambitious and confident.

I enjoy the process of discovering my characters. They become a lot like imaginary friends during the time I’m writing. If I’m struggling with one, I’ll sit down with him or her and conduct an actual interview. Their answers sometimes surprise me. At one point, when I was having trouble connecting with Robert, I free-wrote some scenes from his childhood. They’ll never see the light of day, but it helped me to understand him better. And I was able to use some of those ideas in the next book, Beyond the Ashes.

4. How did the spiritual theme of Out of the Ruins develop? Did you know what it would be when you began the story, or did it emerge as you wrote?

I started writing Out of the Ruins with the seed of an idea: a grieving young woman vows never to speak to God again. I knew the earthquake would serve as a catalyst, but I wasn’t really sure how it would play out. God worked with me as the story progressed, revealing a little more of Himself with each chapter.

5. I enjoyed the intercultural aspect of Out of the Ruins as Abby meets and is befriended by some Chinese residents of San Francisco, particularly girls rescued from human trafficking (sounds awfully reminiscent of today). How did this part of your story develop? Have you been impacted by cross-cultural friendships yourself? I know I have been!

Interesting question, Kiersti! I stumbled over the story of real-life missionary Donaldina Cameron when I was researching information on the 1906 earthquake. I found her life fascinating and immediately wanted to work aspects of it into the Golden Gate Chronicles. Abby first encounters Donalidina Cameron and the Chinese mission in Out of the Ruins. Their story continues throughout the series and becomes a major storyline in book three, which I’m writing as we speak.

I have been blessed to have a few cross-cultural friendships, though not as many as I’d like. When I was in middle school, I had a good friend who had moved from Thailand. Her soft-spoken manner and sharp wit probably influenced the way I wrote the Chinese characters in Ruins. I remember visiting her home and feeling like I’d stepped into another world, yet my friend seemed so much like me. I found the odd dichotomy of “just like me/not like me” intriguing, and I hope to capture some of that wonder in the series.

6. That’s so cool! It’s amazing how sometimes we can seem to have more in common with someone from another culture than people from our own. So… what do you hope readers take away from Out of the Ruins?

I hope readers come away understanding how deeply God loves them. I’m awestruck by the idea that even when we push Him away, He never gives up on us.

7. What other projects do you have in the works? How can readers find your books and stay in touch with you?

The next book in the Golden Gate Chronicles series, Beyond the Ashes, releases May 2015. I am absolutely head-over-heels in love with this story. Ruby King Marshall (Robert’s sister) is a young widow trying to put her life back together and where better to do that than a city in the midst of rebuilding? She travels to San Francisco to help earthquake victims, and instead finds romance with cancer researcher, Gerald Larkspur. When Gerald develops symptoms of the disease he’s striving to cure, will Ruby risk love—knowing time might be short?

My novels can be found in Christian bookstores, and they’re also available at most online sellers in both print and ebook formats. I love chatting about fiction, so I encourage readers to come find me online. Here are a few of the places I hang out: 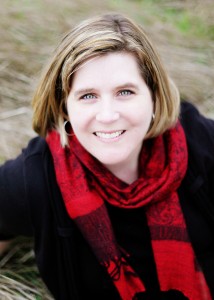 Thanks so much for hosting me on your blog, Kiersti!

Thank you for joining us, Karen! Your next book sounds amazing. Reader friends, I do hope you will check out not only Out of the Ruins but also Beyond the Ashes when it releases next spring!

2 comments on “Out of the Ruins: Interview with Author Karen Barnett”