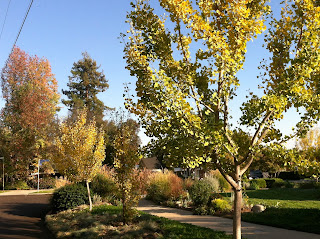 I’ve been sick for the past week. It’s been a while since I was truly sick—I’ve been fighting bugs all fall, but this one got me, with a genuine bad sore throat, slight cold, and yucky-feeling chest.

At first, I’ll admit I half enjoyed it—the excuse to lie around and read Sherlock Holmes, watch a bit of Netflix, and add several thousand words to my current novel-in-progress. But after a few days, I began to tire of not-getting-better. As with most areas of life, I became impatient when things didn’t go according to my timetable. 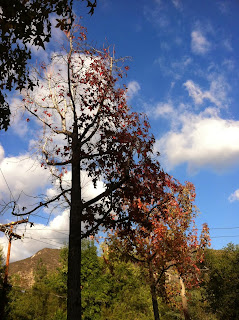 I think the Lord has been doing some things in my heart during this week of sickness, though. After all, there’s nothing like being laid up and unable to do anything about it to remind me how very little in control I am. And that’s a good thing to remember, now and then…or every day.
I’ve delved into some deeper reading during this bug, as well as reading for pleasure. I finally finished C.S. Lewis’s The Screwtape Letters, and the other night picked up Elisabeth Elliot’s Shadow of the Almighty: The Life and Testament of Jim Elliot. I’m not sure if I’d ever read it before—if so, not since I was a young teen. I’ve been struck in a deep place by young Jim’s passion for seeking after Christ, his hunger to know Him better, his willingness to surrender all, even the mutual love budding between him and Elisabeth during his college years, to God’s will. He was willing—even wanted—to give up the woman he loved if their marrying would not be for the furthering of His purposes. 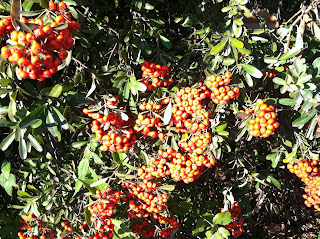 I took a walk on Sunday, which must mean I’m a little better, even if I haven’t felt it, and drank in the ruddy and golden fall leaves lit by late afternoon sun, the blue of the sky, the coolness of the breeze. It’s our first autumn in this neighborhood, leading to new discoveries of which trees change and where bursts of red berries appear.
I love fall…it might be my favorite season. But I began to think of it in a little different way on that walk—as a season of acceptance, surrender, and trust, when the trees surrender in graceful glory their leaves to the next season, when all creation seems to draw a collective breath of contentment and simple gratitude.
I’ve been wrestling with God the past few weeks. My struggles can’t compare with those of so many around the world, I know. Yet, in my own humanity, it’s been hard. But I hope He’s helping me yet again into a new level of surrender…perhaps less a new season as a one-day-at-a-time. I was struck recently by the words introducing this beloved old Psalty song (did anyone else grow up with that blue singing songbook pointing them to Jesus?)…that we don’t have to trust God for the strength to make it to the top of the mountain, just for the strength to take the next step.
So here I am, learning to surrender, to trust Him when I can’t see the path ahead or understand what He is doing. Learning He is enough, and that this world is not the main point, after all. Learning to be thankful for the gifts He gives me all around, and to just walk by His side.
One step at a time.

2 comments on “One Step at a Time”