Once upon a time, th 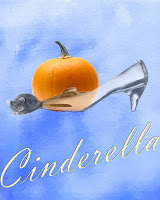 ere was a little girl who loved to play Cinderella.

She would don her grandmother’s tattered patchwork skirt and go about with her broom, or dress up in her mother’s beribboned petticoat and bedjacket and run upstairs fleeing the “palace” and leaving her slipper behind for the prince—who might be Mommy or an obliging little boy. She watched the 1965 Rodgers and Hammerstein’s Cinderella over and over again.

As she grew, she became more enamored with pioneers than princesses and wore sunbonnets more than glass slippers.  But deep in her heart, growing stronger as she grew from childhood to maidenhood, remained the longing to find a prince who would love her, pursue her—though perhaps not down the palace steps—and want her for his princess.

But princes seemed to be in scarce supply these days. Sometimes a fine young man came along, and they came to be friends, and she wondered if he might be her prince. But he never was. And tears came, and broken dreams, and sometimes the maiden thought perhaps no prince would ever want her after all.

The good thing was, those tears and heartaches helped her make a discovery: there was a Prince who loved her, who wanted her, who had left His palace for her sake and even given His life for her. Who loved her more than any earthly man ever could, and who would never fail or leave or disappoint her. And she learned to press closer to Him, and to know that if the only Prince she ever knew was Jesus, He was enough . . . even though sometimes her heart still ached for an earthly one.

Well, after some time, through her cousin, the maiden was introduced to a quiet young man. At first she didn’t think he could be her prince. After all, she was quiet too, so how could that work? And yet . . . he looked and acted so much like a prince. She hadn’t known men like him even existed anymore.

They slowly got to know each other, and learned they had a lot in common. They were both rather old-fashioned and liked walking through gardens, going to plays, and having tea. They both loved children and wanted to follow Jesus. They had longer and longer talks and discovered that neither one was quiet all the time. They went on picnics and made each other laugh.

One day, the prince told the maiden his feelings for her went deeper than friendship. Though she was growing to care deeply for him, she wasn’t entirely sure of her feelings yet. He was very patient with her. And only a few weeks later, she told him she was ready, and their courtship became official. 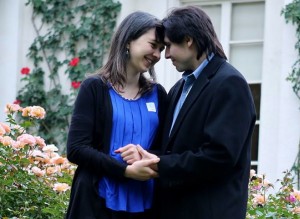 A snapshot of Anthony and me the day we got engaged…taken by my husband-to-be himself. He is so talented. 🙂

Over the next year, they made many more memories. They spent time with friends and family, watched movies, and went English Country Dancing. They discovered that neither one of them was perfect and hurt each other’s feelings and learned to forgive. They had lots and lots and lots of long talks.

Then, on the anniversary of the day the maiden told the prince she was ready for a relationship, he took her to a beautiful garden of roses. And catching her completely by surprise, he knelt down and asked her to be his princess for as long as their Lord would allow.

And she said yes.

As you might have guessed, I am the girl in this story. And I am so very humbled and grateful and honored to announce my engagement to the wonderful Anthony Giron, a man of great honor, integrity, thoughtfulness, wisdom, dignity, and grace.

I hope you have enjoyed this little fairy-tale of ours . . . which seems especially appropriate because Anthony really does have a princely title, bestowed when one of his high school English teachers, a wonderful lady, established a royal court within her tenth grade class to accompany their study of English history and literature…a tradition that carries on among them to this day. Anthony’s official title is the Prince of Wales (Heir Presumptive to the Throne), and Royal Duke of Cardiff, among other holdings.

And he truly does make me feel like a princess, even if I sometimes feel unworthy of the title. But I do look forward to becoming his wife. I’m sure I will share more about Anthony with you over the coming months as we prepare for our wedding—in the meantime, we appreciate your prayers as we move through this time of great transition, but also much joy!

23 comments on “Once Upon a Time: A Story and an Engagement”