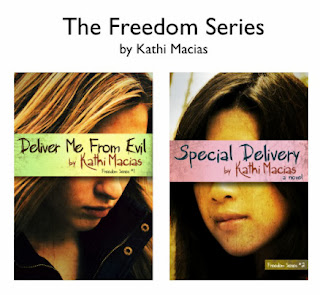 Early last year, I connected with a lovely authoress after I watched an online interview she did on human trafficking, the focus of several of her novels. When I emailed to thank her for helping raise my awareness, this gracious lady, Kathi Macias, offered to send me one of her books for free, so I could learn more and be able to help educate others.
I’ve meant to blog specifically about her books for some time, but just never have, though I put a picture of one of her books in another post once. Yesterday, though, when I was trying to think what to post this week, the Lord brought my attention to these two books (she sent me two, not just one!) on my shelf, and I thought perhaps it was time.
In Deliver Me From Evil, the first book in Kathi’s Freedom Series, we meet Mara, a young girl taken into sexual slavery by her own uncle at a horrifyingly young age. Through Mara’s eyes and story, we face human trafficking in its brutal reality. I found myself caught up in the pages, reading the novel quickly, though some parts made me feel physically ill. The subplot of college student Jonathan and his nice Christian suburban family added a balance of normalcy to the story, while also giving a sobering reality check for many of us—for the place where Mara is kept in slavery lies quite near Jonathan’s friendly San Diego neighborhood.
I wonder how many of us have a den of human trafficking so close by?
Maybe one reason I’ve shied away this long from blogging on this topic is that I really know so little. I’ve learned some about this terrible scourge of trafficking in human lives, but I often simply feel overwhelmed by the hugeness of this evil and don’t know what to do about it. But, since` I’ve often hoped that I would have stood against legal slavery in American 150 years ago, it seems I cannot simply ignore slavery in its present day shape in our world.
And there are two things I’ve learned I can do.
First, I can support organizations who have the experience and expertise I lack, with a proven track record of fighting human trafficking in Jesus’ name, such as the International Justice Mission.
And I can pray. I’ve been convicted more than once that praying for huge social evils like human trafficking is one of the most powerful things we can do—yet I tend to think of it as “just” praying. But I saw a post once from an anti-trafficking organization stating that one of the biggest human trafficking busts of recent years came after a concerted effort of believers praying. Prayer has enormous spiritual power, and all evil in the world is, after all, at its core a spiritual battle.
I know there is much more we can do. But it was these stories that helped touch my heart to the point of taking action even in these ways. So I’d encourage you to check out Deliver Me From Evil—though be forewarned it is not easy reading–along with sequels Special Delivery and The Deliverer.
Kathi writes about the reality of darkness, but even more, about the Light that shines in the darkness. In that way she is a model and inspiration to me, and I know for many other writers as well.

A poem written by a girl rescued from human trafficking.