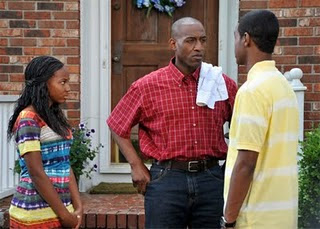 After sharing what I was wrestling with last week, I wanted to also share some other things about Courageous that I really liked. And there was a great deal.

One thing I’ve appreciated about Sherwood Pictures is that their movies tell good stories. They also haven’t been afraid to tackle big issues—infertility and crisis of faith in Facing the Giants, pornography addiction and near divorce (along with realistic fireman peril) in Fireproof , and now fatherhood, gang violence, unemployment, and tragedy in Courageous. We novelists are often told to “raise the stakes” of our conflict—make it matter more—to bring greater depth to our stories, and this is something I have felt some other Christian films failed to do. In those cases, I didn’t care that much about the characters or the outcome, because there just wasn’t that big of a problem. With Courageous, from the startling first scene to the end, I definitely cared. 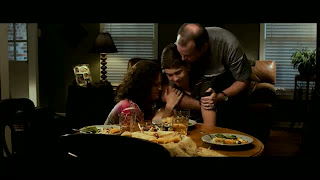 The movie also dealt, very believably to me, with the loss of a loved one. I don’t want to give too much away, but it isn’t often a movie sends tears not only to my eyes but down my cheeks. My family has been through grief—from the death of grandparents to the loss of three babies, and I found the portrayal of family in the movie very real…the shock, the gray daze afterwards, the “why” and questioning yourself and God, the curling in a ball sobbing. The starting to realize you’re going to be all right someday, and even starting to laugh again…only to have the grief strike anew. This family began to be okay, eventually, just as by God’s grace my family is…but to quote the movie, “You do heal, but you’re never the same.”

This is the first Sherwood movie with more than one professional actor in it, with half the roles being Christian actors now and half still played by members of their church. (My sister and I enjoyed guessing who was who.) But nonetheless, the actors in Sherwood movies always manage to make me believe them. I believe their grief and their joy; I care about them, root for them, and—especially in this movie—sit at the edge of my seat for them. And for me, whether a book or movie sweeps me up in the story and characters matters more than each detail of the writing or acting being critique-proof. Much of the acting I found truly good. 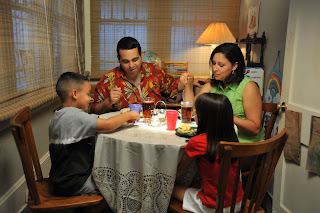 But the heart of Courageous is fatherhood. Fathers are often underplayed, neglected, or absent today, with tragic consequences—a fact this movie drives poignantly home. It made me thankful for my daddy and his courageous commitment to love, guide, and protect his girls. I hope this movie reminds fathers of all stages and walks of life how important they are, and draws families closer to each other…and most of all to the Lord, the Father of the fatherless and of all who come to Him.

So is Courageous still playing near you? Check it out and see what you think!