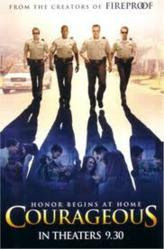 My family and went to see the movie Courageous in the theater this past Saturday. I don’t know when I’ve laughed and cried so hard during a movie. We’ve enjoyed all the movies made by Sherwood Baptist Church in Georgia—Flywheel, Facing the Giants, and Fireproof—but I think Courageous was their best one so far. The acting and cinematography definitely have stepped up, though of course they’re not at Hollywood standards yet. And we love seeing all the Sunday School classes who contributed meals during production listed in the credits.

I stayed up pretty late that night, reading various reviews of the movie—Christian and secular—and finding them quite mixed. Common complaints included preachiness, subpar acting, a plot that tried to incorporate too much, a weak ending, and racial stereotyping. That last concern troubled me the most, as in the last few years as I’ve begun to learn how much racism and discrimination are still at work in our society…and in the church.

Before seeing the movie, I hadn’t expect the film to come under that kind of criticism, since Sherwood seems to have made an effort to include characters of diverse backgrounds and portray ethnic minorities positively in their movies. Of the five fathers whose stories Courageous follows, three are Caucasian, one is African-American, and one is Hispanic. I guess I don’t feel qualified to determine whether racial stereotyping was a real issue in the film or not, as a white girl who is still awfully new at learning to see through others’ eyes…which I guess we can never do fully. I’d like to learn what my friends of other ethnic backgrounds think of the movie, though I’m guessing opinions will differ there as well.

What stood out to me from the film was the way the fathers of such diverse backgrounds bonded, loved, and did life together. The fact that the Hispanic immigrant father worked in construction and at a factory didn’t make him any less than his black and white friends who worked in the police department. They barbecued together, supported and challenged each other, and held one another accountable for their God-given responsibility for their families. Most of the gang member characters were African-American, but so was the father of a stable, well-provided-for family who took his fifteen-year-old daughter out for dinner to talk about saving her heart for the man she would someday marry—and also reached out to mentor a hurting young man seeking family in a gang because he had nowhere else to belong.

To me, the racially diverse characters were all real people, were equals, were friends seeking to lead their families in following the Lord together. That was what I liked. No doubt it could have been done better. No doubt Sherwood has their blind spots, and I do too…and I hope the Lord and His people will continue to help remove them. I do know Sherwood Baptist is seeking to work towards racial reconciliation, partnering with Mt. Zion Baptist to further that goal in Albany. I guess we just all need to keep learning and growing with humble hearts together.

So what about you? Have you seen Courageous, or will you? What did you think?