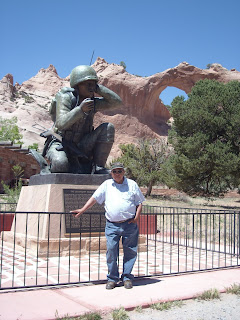 I never remember reading about them in a history book, though possibly I did. Though their story was declassified from military secrecy in 1968, these quiet World War II heroes were not officially honored until 2001. Yet their actions helped turn the tide of the war in the Pacific and save countless lives.

They are the Navajo Code Talkers.

I first remember learning about them when my dad saw a video on the Code Talkers while substitute teaching at Shiprock High School when we lived in New Mexico. He was so moved by the film that he borrowed it and brought it home for our family to watch. Then when I visited NM again this past June, I visited the Code Talkers display at Rehoboth Christian School and saw the DVD the students had put together by interviewing code talkers connected with Rehoboth. The father of my host family (a Marine himself) had two cousins who were code talkers, and he showed me their names in the bricks surrounding the Code Talker Memorial in the Navajo Nation capital of Window Rock, Arizona (see above).

In 1942, American codes were being broken right and left by the Japanese, seriously hampering the war effort. Then Philip Johnston, son of missionaries and one of less than thirty outsiders who spoke the yet-unwritten Navajo tongue, suggested using that language to develop a code. Twenty-nine young Navajo men were recruited and sent to California for basic training—and, unbeknownst to them at first, to develop what became the “only unbreakable code in modern military history,” according to the official website of the Navajo Code Talkers. The system these young men invented enabled messages to be transmitted in twenty seconds, compared to the thirty minutes it took for a coding machine. During the battle of Iwo Jima, Navajo Code Talkers communicated 800 error-free messages within the first forty-eight hours. And the code was never broken.

As the code took effect, the tide of the war began to turn. Peace was established. And the Code Talkers returned to the reservation, to their families and flocks in their Diné Tah, virtually unrecognized until President George W. Bush presented the surviving Code Talkers and their families with Congressional Medals of Honor in 2001.

Only a few Code Talkers remain alive today. As I would love to write about their story someday, I hope I get the chance to interview one before it is too late. But on this Veteran’s Day, I want to say “Thank You” to these veterans, these First Peoples members of our nation who gave so much to protect their people, their land, and the rest of us, as well as to ALL veterans who have sacrificed to help keep us safe and free. We take you for granted far too often; may God bless you on this day.