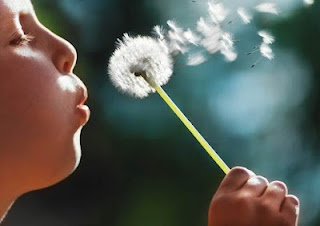 Laughter peppered our ride in the family car to my grandma’s graveside servicelast week—thanks in large part to my little four-and-a-half year old cousin. Her dimpled smiles, dark curls escaping her French braid, and innocent comments helped bring out the joy God was giving us amid grief.
“What did one ocean say to the other ocean?” she would ask. When we professed ignorance, she would reply , undulating her arms in illustration, “Nothing—they just waved!”
She helped lead us in a rousing rendition of “Old MacDonald Had a Farm” and declared with utter lack of pretense her contrasting opinions of a chunk of unfamiliar cheese and a chocolate protein bite.
And every so often, she would peek from beside my aunt (her grandma) to see her dad and say, “I love you, Daddy,” then sit back in the assurance of his, “I love you too, baby.”
When we reached the graveside, she said of the casket, “It looks like a treasure box,” to which my aunt explained that in a way, it was. She asked, “Is Gomie in heaven?” and at the affirmative answer, decided her great-grandmother was with another friend who had recently passed away and that, “They’re playing together.”
She got me thinking, this little cousin of mine. So genuine she is—so artless, so honest. She isn’t old enough yet to care what people might think; she just says whatever she thinks or feels at the moment. No, she’s not perfect—but in pondering her genuine joy, her uncensored reactions (though carefully taught manners come through as well), her freely given hugs, her instant and enthusiastic love for our cat when we arrived home, her tears after an ouchie collision and squeals of joy when tickled, she reminded me of Jesus saying this is how He wants us to come to Him.
As a child.
What does that mean for us grown-ups?  Caring less what other people think of us? Maybe even worrying less on our imaginings of what God thinks of us, and rather just coming to Him, honestly and without pretense, as a small, trusting child to her Daddy? Being willing to just be ourselves, who He has made us to be? Simply loving and being loved?
What an amazing God we have, to want us to come to Him so. Lord, teach me how.

“Truly I say to you, unless you are converted and become like children, you will not enter the kingdom of heaven.” ~Matthew 18:3