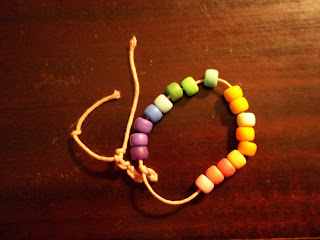 Three Thanksgivings ago, I spent the holiday weekend in Mexico. This is taken from that experience.

I sat on the trash pile behind the orphanage, scrubbing bright blue paint out of a tray with turpentine. On this Thanksgiving weekend mission trip from my university, we had painted the children’s swing set and bench this same brilliant blue, and it was clean up time. But now five-year-old Angelo* demanded my attention.

Holding out a pink string threaded with the multicolored beads we had brought for craft time, he measured the length around my wrist. When he finally had it to his satisfaction, he knotted the bracelet just so. I wore it for the remainder of our stay.

Though I had quickly come to love all the dozen or so children at the orphanage, Angelo particularly tugged at my heart. He continually begged for hugs and kisses, probably craving true affection, as he had been sexually abused. Like most of the children here, he was not technically an orphan but rather had suffered the ravages of abuse and/or drug-addicted parents. Generally happy-go-lucky, Angelo broke into whining or tears at any bump on the head or crossing of his will—spoiled behavior for most five-year-olds, but in him I sensed old wounds peeking through.

Other times, though, he was just a little boy. Over and over I pushed him in a small toy car around the concrete play area, hollering steering directions of “¡A la derecha! ¡A la izquierda!” to avoid the basketball or futbal (soccer) games between the older boys and those on my missions team who—unlike me—possessed at least rudimentary sports ability. One evening I stayed till dusk with Angelo and a little girl out in the dirt yard, clowning around with plastic cones. Angelo shrieked with laughter as I held the cones over my nose, ears, and mouth, pretending to be confused as to their purpose: “Es nez?” “Es oreja?” “Es boca?” Throughout those days, surely the most common plea we heard from the children proved, “¡Otra vez!”—“Another time.”

And then, too soon, we were out of “times.” After taking the kids back to our campsite the last evening for dinner and worship, it was time to say good-bye. The teenage boys smiled and hugged us, but looking into their eyes I wondered how many people had come for a week or weekend and begun relationships with them, only to drop out of their lives. I hugged the younger ones, whispering in my broken Spanish, “Adios—te amo, y Jesús te ama—mucho.”

Angelo cried, but not with his usual whininess. His eyes filled with silent tears, his little face so sad. I pressed him close and whispered the words I had to the others, adding “Tu es precioso.” I hoped he understood. Their bus drove away, and we headed back to chapel. Several of us wept as we sat in the freezing night under the stars, and I couldn’t concentrate on the message for a while. How could we do this to these children—show up and build relationships with them for a few days and then up and leave? Would it have been better if we hadn’t come? I didn’t know; I merely sat there and cried and prayed for them.

I arrived back at school sick with the flu, and for a time I hardly wanted to think about Mexico, though the rainbow bracelet on my desk spoke a constant reminder. What had we really accomplished, after all—painting a swing set, fixing a roof, washing a bus?

Breaking little hearts that had been broken too many times already?

I still don’t have the answers. But we learned from the director of the orphanage that to her, what our team did was significant. And while there may be better, more lasting ways to help orphans than ours, I have to believe that as God’s Word does not return void, neither does His love…even when expressed through such broken and imperfect vessels as we. I hope and pray that the hugs and time we shared, the truth I tried to whisper that last night that he is precious in God’s sight, sank into Angelo’s heart—and those of the other children—to stay.

The bracelet of rainbow beads still remains tucked in my jewelry box, as the children of the orphanage stay tucked in my heart…not always visible, but still in my prayers from time to time. Perhaps, far more than anything we taught them, they taught us: how to love with abandon, as they threw their arms and hearts open to us, though we only appeared in their lives for a few days. How to know childlike joy despite pain. And what it is to forget about oneself, even for a weekend, and serve the “least of these,” whom Jesus calls the greatest in His Kingdom.