Sometimes people feel that separating out a select month for African-American history only emphasizes racial divisions rather than helping overcome them, but I love how my friend Sandra Barnes addresses this issue here.  It’s only in the last few years that I’ve really become aware of Black History Month myself, but I’ve grown to appreciate its value—if nothing else, to teach me history I didn’t know before! So here are my reasons for honoring Black History Month. I’d love to hear your thoughts.

1. Because it’s also American history…just parts that don’t get talked about as much.

Most of us are at least somewhat familiar with a few important African-American historical figures, like George Washington Carver and Rosa Parks…though even they didn’t seem to get a whole lot of coverage in the history books I remember. But I’m realizing there are so many more who just aren’t talked about, yet greatly affected the history of our country. Here are just a few I learned from Dr. Ben Carson in the documentary Return to Glory. Have you heard of any of these amazing people before?

African-American history is rooted back in biblical times, as Return to Glory explores through the rich ancient Egyptian civilization and God’s promises to the peoples of Africa. And the churches of Ethiopia and Egypt are among the oldest continuous communities of believers in the world. After all, the Ethiopian eunuch was one of the earliest Gentiles to come to Christ (see Acts 8).

The African-American church also formed a driving force of the Abolition movement in the first half of the 19th century, and black church leaders have continued to play key roles in American church history, from Dr. Martin Luther King Jr.’s heavily biblical rhetoric to Dr. William “Bill” Pannell, preacher, evangelist, and author, and Dr. Raleigh Washington, the current president of Promise Keepers.

3. Because it helps us better understand and appreciate our differences—which ironically, can bring us closer together

I don’t think celebrating Black History Month (or Native American Heritage Month) divides us more…or at least it doesn’t have to. After all, most of the rest of the year our culture and history books focus a lot on white history! If we are going to really know and love one another, we need to know and learn each other’s history and heritage, what makes us who we are. Months set aside like this are a wonderful opportunity to do that.

4. Because if we aren’t familiar with the past, we’re ill-equipped for the present and future

If we don’t understand history, we won’t very well be able to grasp how it has shaped our world today. Learning about the past—all sides of it—can help us understand ourselves and those around us. Media and the news often bring a negative focus to black history and the AA community in general. We need to learn about the bright and shining and inventive and courageous parts.

5. Because although someday hopefully we won’t need a Black History month, right now we still do 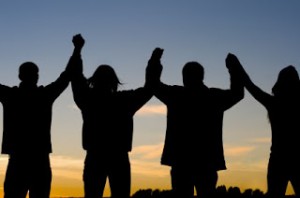 I hope someday it won’t be necessary to focus special months on the history of minority groups for that history to get taught at all—that the history of all peoples can be beautifully woven together in our churches, families, and schools. But until then, when our country still so clearly needs to grow in racial healing and understanding, let’s take advantage of this opportunity to do just that!

2016 update: I’ve been thinking about Black History Month a lot lately, as I’m in charge of celebrating it at the school where I teach this year. I hope to share more about that soon, but in the meantime, let me hear from you!

2 comments on “5 Reasons to Celebrate Black History Month – Whatever Your Color!”