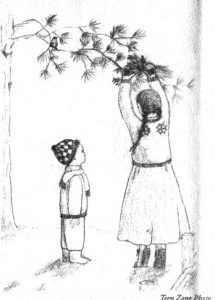 This little story was my first to appear in print, in the teen section of our local newspaper when I was nineteen and inspired by my own Danish immigrant heritage. I did the illustration too. Merry Christmas, friends, and I hope you enjoy!

Maren Jensen stood on tiptoe, fastening the small sheaf of oats to the lowest branch of the pine tree.

“Why we giving that to birdies?” asked four-year-old Lars.

“Because it’s Juleaften—Christmas Eve,” Maren replied. “It’s the most important day of the year. We want the birds to have a happy Jul.”

“Like us, ja?” Lars giggled. “Come get your Juleaften dinner, birdie!” he called to a sparrow perched on the snow-capped fence.

Maren brushed oat straw from her woolen sweater and smiled at her brother. Lars was to little to understand that Christmas 1880 in America couldn’t be like Jul had been in Denmark. Maren was eleven, and she knew. Sighing, she reached over and pulled Lars’s red knitted cap down over his fair hair. “Let’s go see how our dinner’s coming along,” she said.

Lars whooped and raced ahead, kicking up a shimmering spray of snow.

Snow, Maren though. I’ve seen more snow in the two months we’ve lived in Minnesota than I did back home in my whole life! A white Jul doesn’t seem special here. 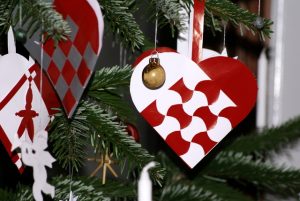 The warmth of the cabin and the smell of browning potatoes and aeblekage, apple crumb cake, surrounded Maren like a hug as she followed Lars in the door. She glanced at the table laid with the Christmas cloth and centerpiece of evergreens and candles. Mama looked up from mixing pebbernodder cookies and smiled at them.

“Let’s save the treats for tonight,” Mama told him. “Would you play with the baby while I get these in the oven?” Lars plunked obligingly next to the blanket where Kirsten kicked and cooed.

Maren tolled a piece of dough into a long strip. “I wish we hadn’t sold your china and silver,” she said wistfully. “The table looks empty without them.”

Mama sighed. “I know. But we needed the money—and the space. They might not have survived the boat trip anyway. The table still looks pretty, don’t you think?”

“He went over to the Swansons’. They have extra lutfisk this year and offered to give us some for our Juleaften dinner.”

Maren almost dropped her roll of pebbernodder. Pickled fish for Christmas? “We aren’t having goose?”

“No—the geese have gone south, Maybe we can raise one next year, but I’m sure the lutfisk will be good. The Swansons are kind to share with us.” 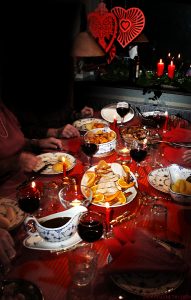 Maren’s head spun. She knew their Swedish neighbors loved their Christmas lutfisk, but what would Juleaften dinner be without a goose stuffed with apples and prunes? At least she could do one thing to make their holiday more like a real Christmas. With the pebbernodder baking, Maren dug a thin package from under her mattress.

“Lars!” she called. “I have a surprise!” Lars’s eyes shone when he saw the red and white paper she had saved. “We’ll weave heart baskets for the Juletrae—Christmas tree!”

An hour later, Maren stared sadly at the paper fragments scattered over the floor. Lars had ripped half the baskets in his eagerness. Slowly she gathered the scraps and the four remaining hearts. It’s no use, she thought, pulling out her best skirt and blouse to wear to the five o’clock church service. We can’t have a real Christmas this year.

“Maren!” Papa beckoned from across the church. The little log building bustled with people, but Maren managed to excuse herself over to her parents who were visiting with an unfamiliar woman and a girl slightly smaller than Maren.

“Else, I’d like you to meet my daughter Maren,” Papa said. “Maren, this is Else Brimberg. She and her mother have just arrived from Denmark.”

“Good evening,” Maren said shyly. Else nodded and looked at the floor.

“Why don’t you and Else take Lars to see the Juletrae?” Mama suggested. “Watch that he doesn’t touch the candles.”

Lars stared wide-eyed at the candlelit fir tree near the wooden altar. Maren smiled at Else. “Do you like Minnesota?” she asked. The new girl shrugged. “How was your voyage?”

Else shivered. “My papa died of cholera on the way,” she said softly.

Maren caught her breath. She glanced back at Papa standing tall and strong as he bounced baby Kirsten. Her eyes blurred, and she touched Else’s shoulder. “I’m sorry!” she whispered.

Mama called, “Come, children!” People were finding their seats. Maren tried to concentrate on the carols, but a thought kept buzzing around her head like a persistent fly.

No! She told herself. Juleaften evening is our special family time. But she couldn’t push Else’s sad blue eyes out of her mind.

Pastor Hansen’s sermon broke into her thoughts. “Jesus left His perfect home in heaven and was born as a helpless baby on earth…for us! That is why we have Christmas.”

Maren gazed at the small wooden cross on the altar. Candlelight flickered over its smooth surface. Lord Jesus, she prayed silently, You know what it’s like, don’t You, to leave a home you love and go to a different place? You did that too; You chose to do it because You love me. A verse crept into her mind: “as I have loved you, that ye also love one another.”

When the service was over, Maren turned to her mother. She took a deep breath.

“Mama,” she said, “could we invite the Brimbergs to share our Juleaften dinner?” 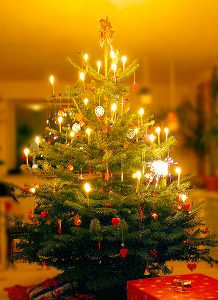 The flickering light of the Juletrae candles danced on the log walls of the Jensens’ cabin, on the four red-and-white hearts, on the faces of those gathered around. Maren slipped her hand into Else’s and squeezed it. Else glanced at her in surprise; then she smiled a small smile and squeezed back.

“Glaedelig Jul—Merry Christmas!” Maren whispered. It was a real Christmas after all.